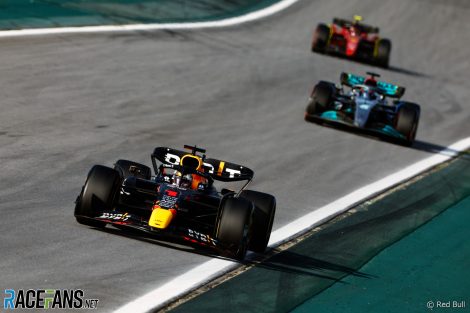 Mercedes’ win-less streak is over. Technically. After 20 grands prix and three sprint races, George Russell did what he and Lewis Hamilton had previously failed to do all season – take the chequered flag first during a race session in 2022.

Crucially, Russell’s sprint race win was down to him being the quickest on the track. It was not won by default – a gift from Red Bull with a mechanical failure or a crash involving cars ahead. Russell passed surprise pole-winner Kevin Magnussen, then chased down Max Verstappen. After three attempts to get by, the lead was his, and with that soon followed the victory and pole position for today’s grand prix.

For the first half of the sprint race, Verstappen appeared to have the race under control. He was the only driver, aside from Nicholas Latifi, to choose the medium tyre compound. Once he slipped by the Haas to take the lead, Red Bull could have expected the champion to keep a steady pace until the end for a comfortable win. That did not happen.

Red Bull team principal Christian Horner explained the team’s choice was based on their doubts about the soft tyres, rather than being sold on the mediums.

“We felt that the soft was limited in range so we took the decision to start on the mediums, thinking if we could survive the first half of the race, we would be alright,” Horner explained.

“However, when we got there, we found we were suffering worse degradation than anticipated. To add to that, Mercedes had a quick car today and those two factors meant we couldn’t hold them off.”

Russell admitted the call to start on softs was not as obvious as it may have seemed. “I think it definitely wasn’t clear-cut,” he said in the press conference following yesterday’s race.

However Russell suspects Verstappen’s sprint race strategy could have earned him an advantage for the grand prix.

“I think we’ve all recognised that the soft was probably the best-performing tyre this weekend in the race, which is quite odd. Obviously that means if you use the soft today, you’ve got one less tomorrow. So even though Max and Red Bull didn’t have a strong race, they’re probably in a slightly better position than the three of us going into the race tomorrow as they’ve got that one extra set of new softs.”