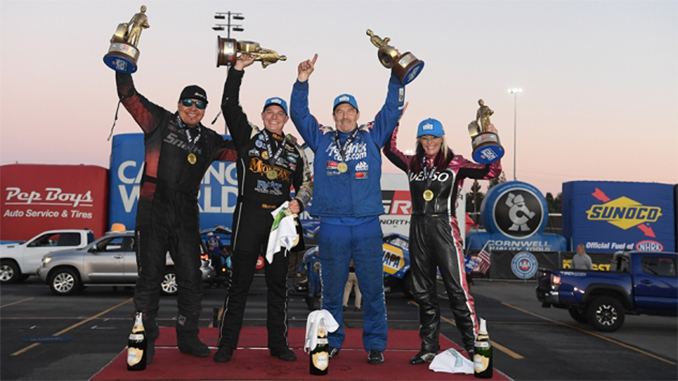 Force qualified No. 1 in her 11,000-horsepower Monster Energy dragster and then earned the championship with her run of 3.701-seconds at 334.90 mph in the opening round of eliminations. In a season that included five wins, 10 No. 1 qualifiers and the fastest run in Top Fuel history on Friday, Force, who advanced to the semifinals, picked up her second world title at her home track.

“It just seems surreal. I can’t believe we’re here and it ended up this way,” Force said. “I believed coming into today, I was motivated, and we got the job done. I want everyone to remember this day, here in Pomona with this team. We have been working at this all season long and then we struggled (early) in the Countdown. But we recovered when we needed to here in Las Vegas and here in Pomona.”

Capps earned his second straight world title – becoming the first back-to-back Funny Car world champ in 20 years – by finishing as the runner-up on Sunday in his 11,000-horsepower NAPA Auto Parts Toyota GR Supra. It is his third world championship, which was helped by a shocking second-round loss from Robert Hight on Sunday, who finished second overall on the strength of eight wins. It was a thrilling conclusion to Capps’ first year as a team owner, which also included five victories and a clutch run on Saturday in qualifying to keep his championship hopes alive. Sunday also marked the only time Capps led the points all season – but it proved to be perfect timing.

“The Countdown was crazy. You think about the Funny Cars that had a chance, it just tells you the amount of competition in the field,” Capps said. “We’ve had so many amazing people around us and it’s like we don’t deserve it. I’ve leaned on some great people. Don Schumacher has been unbelievable….