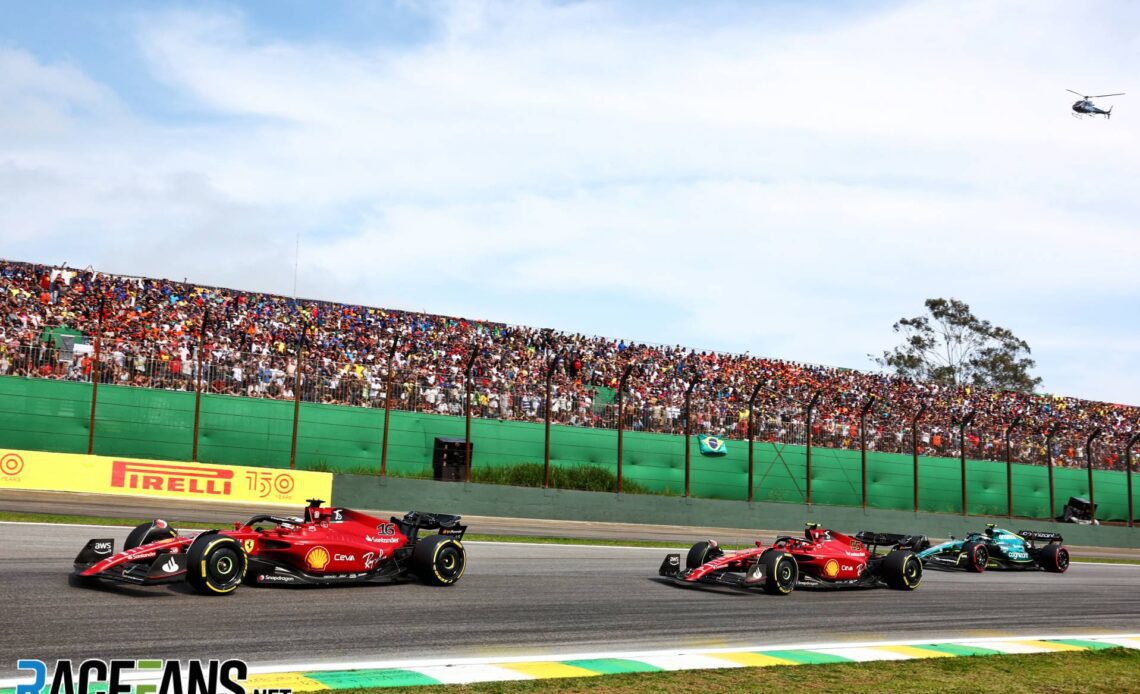 Over the final laps of the Brazilian Grand Prix, Charles Leclerc repeatedly urged his Ferrari team to swap the running order of their cars.

Leclerc was pursuing third-placed team mate Carlos Sainz Jnr at the time and badly wanted the extra three points that came with that position to aid him in his fight for second place in the championship with Sergio Perez.

However to Leclerc’s disappointment the team made no move to swap their cars around. Sainz wasn’t even aware of what his team mate was asking for.

“I don’t normally ask these type of things, but obviously we had this discussion prior to the race,” said Leclerc afterwards. “So that’s why I asked about it.

Ferrari team principal Mattia Binotto explained why the team didn’t swap their cars around. He said the team was being investigated for a potential incident involving Sainz and they did not want to risk losing him time in case he was penalised.

The investigation concerned Yuki Tsunoda, who was the only one of the three lapped drivers who was not allowed to rejoin the lead lap during the last Safety Car period, said Binotto. The FIA later confirmed an oversight meant Tsunoda was not given the instruction to un-lap himself.

The presence of rivals Fernando Alonso and Max Verstappen close behind their cars also made Ferrari reluctant to issue team orders, said Binotto.

“Swapping the two cars on the last straight was certainly tricky because Charles had got Fernando and Max just behind,” he explained. “So certainly it could have been tricky and somehow dangerous.

“But more than that, we knew that we were under investigation for what happened behind Safety Car with Tsunoda. We were cleared off by race control at the time so we were quite, let me say, comfortable, but without having a conclusion on that matter it would have been risky.

“A five-second penalty, for example, would mean that Carlos would have been losing more than one position. So for the constructors championship it was certainly better to stick with the positions and the gaps on track.”