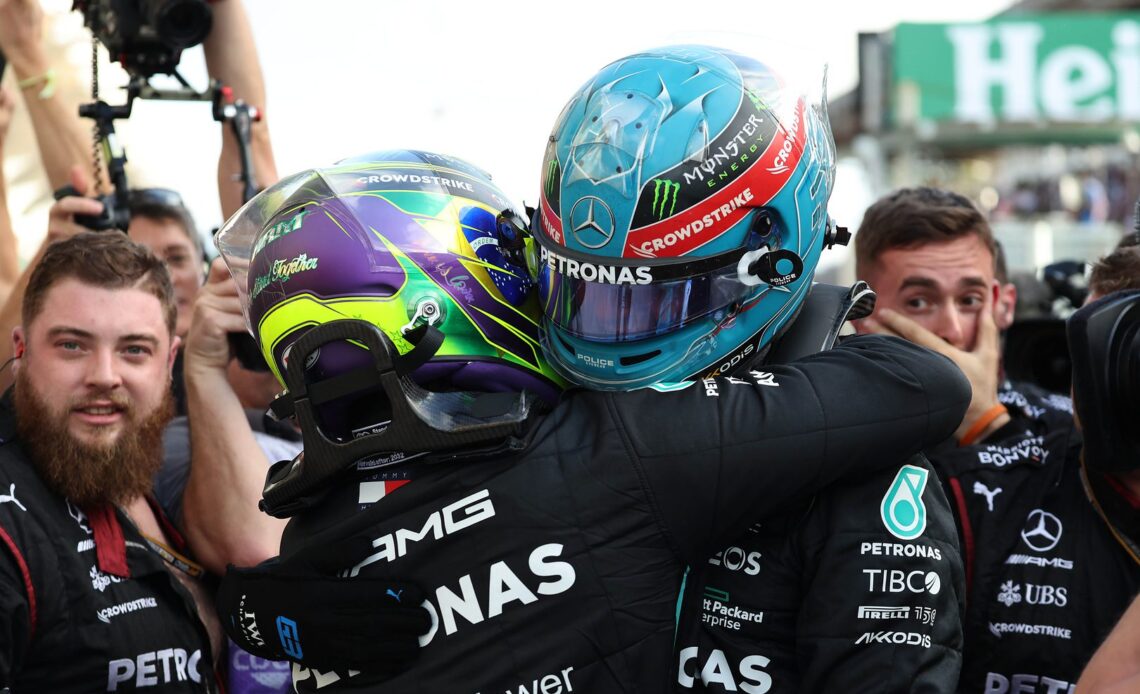 George Russell won the Sao Paolo Grand Prix on Sunday (Nov 13), his first win in Formula 1 and the first win for Mercedes in 2022.  Russell earned the win during the sprint race on Saturday, giving him the pole for Sunday’s GP, and made good, opening with a clean start and rolling from there.  He managed the race like a veteran and crossed the line with his teammate Lewis Hamilton in second.

Carlos Sainz led a Ferrari three–four, as both drivers faced challenges during the GP to assist in trying to hold off Mercedes in the constructor’s championship.  Sainz had brake issues early in the race, while Charles Leclerc recovered early from being tagged and spun to take fourth.  Ferrari lead Mercedes by 19 points (224–205) heading into the season finale in Abu Dhabi.

Fernando Alonso put together a stellar drive after starting 18th, owing to a collision with his teammate Esteban Ocon in the sprint race, and recovered to finish fifth.

Max Verstappen earned sixth after another episode in his ongoing drama titled: Lewis & Max, Max & Lewis.  Fans had thought the series canceled this year as Hamilton has been unable to keep up with Verstappen, but with Mercedes improvements, the two are now able to resume filming the critically lauded production.  Will Abu Dhabi provide another climatic ending for the two drivers??  Stay tuned.

Valtteri Bottas scored ninth; his second consecutive points finish after 10 races without such a finish (a string that includes four DNFs).  Lance Stroll earned the final point of the race, putting together a decent effort after his disappointing effort in Mexico two weeks ago.

The first lap began with a clean getaway by Mercedes teammates George Russell and Lewis Hamilton.  Things looked to be drawing into form as drivers sorted their positions until turn nine when Daniel Ricciardo first tapped and then punted “pole sitter” Kevin Magnussen.  (Magnussen had stunned on Friday by earning pole but started the GP in eighth after finishing in that spot in the sprint race on Saturday.)

What a weekend–to go from earning his first pole, being the first Danish driver to earn pole, and grabbing Haas F1’s first pole,…