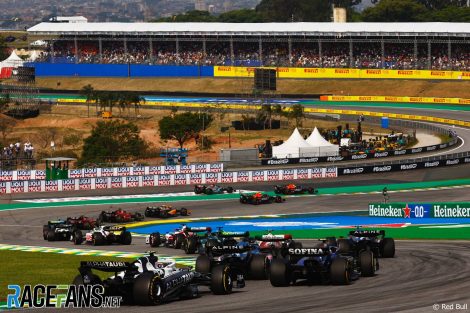 George Russell should have won his first ever race start for the Mercedes Formula 1 team. The 2020 Sakhir Grand Prix was always going to be a one-off cameo, but only outrageous misfortune denied him victory in what was still a stunning first drive for the Silver Arrows.

Twenty races into his career as a factory Mercedes driver in 2022, Russell was still longing for that elusive first win. His team were also starved of success, facing their first win-less season in over a decade, both championships already surrendered to bitter rivals Red Bull.

Then, in the Saturday sprint race for the Brazilian Grand Prix, Russell got just a taste of the feeling by taking the chequered flag to secure pole position. With team mate Lewis Hamilton lining up alongside him on Sunday, Russell started the day knowing it would present his best chance to become a grand prix winner since that crushing night in Bahrain almost two years ago.

But before Russell, Hamilton, and thousands of Mercedes team members in Interlagos, Brackley and Brixworth could dare to dream of victory once again, they first had to contain the threat behind. As world champion with 14 wins to his name just this season alone, Verstappen had earned the status of pre-race favourite no matter his starting position in 2022.

This time, Verstappen was the one staring at the Mercedes ahead of him on the grid. Red Bull’s bet on the medium tyre compound failed them on Saturday. They did not intend to suffer the same problem two days in a row, and Verstappen joined Russell and Hamilton in starting on soft tyres.

When the five red lights vanished after less than a second, Mercedes soundly beat Verstappen to the first turn. Rounding the Senna S, Verstappen had more reason for concern from his team mate Sergio Perez, who lightly clipped Verstappen’s left-rear tyre with his front wing. Luckily for both, no damage was done.

The field meandered through the serpentine middle sector for the first time. Friday’s pole winner Kevin Magnussen swept into turn eight only to be awkwardly pitched into a spin by Daniel Ricciardo’s McLaren. As the Haas was looped around, Magnussen let the car roll backwards, aiming to keep his car out of the firing line. As it happened, Ricciardo had swerved right to avoid the obstacle he had created and was slammed by Magnussen and into the adjacent tyre wall.

“Sorry guys, I’m out,” Magnussen radioed to engineer Mark Slade, one of the best…