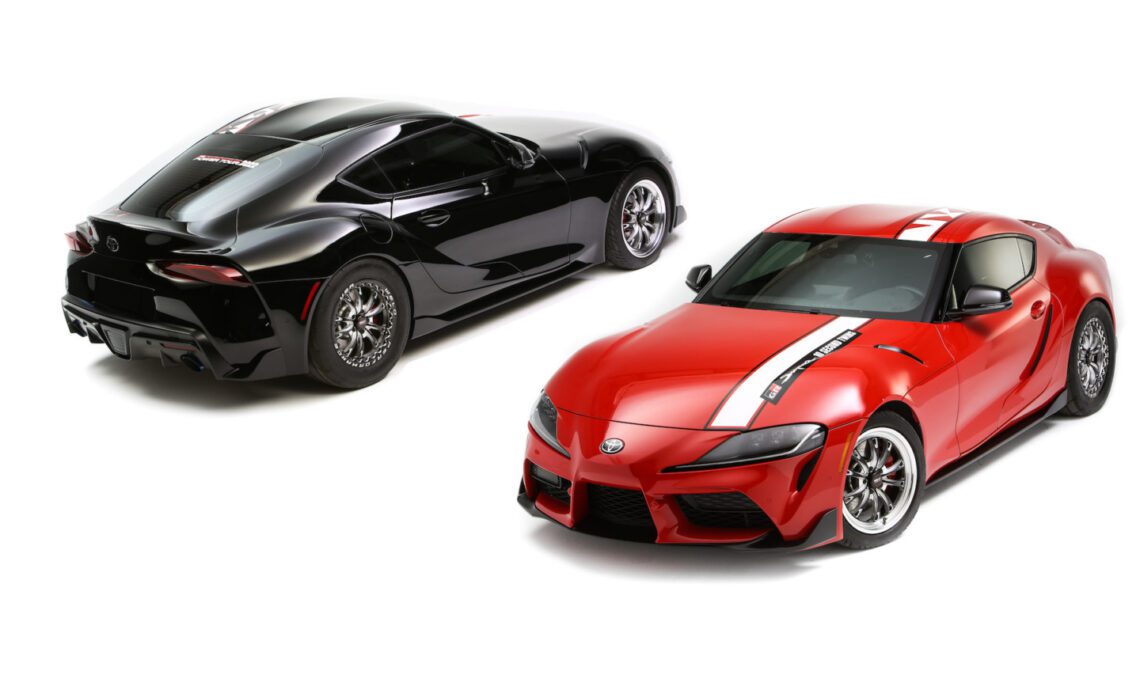 Toyota and the Toyota Motorsports Garage team wondered what they could do with the popular GR Supra, a drag strip, and a $10,000 build budget.

The answer was a 10-second car (a pair of them actually).

The team – Marty Schwerter, lead builder; Brad Vetter, lead fabricator; Justin Lacore, fabricator; and David Senn, technician – started with two 2020 GR Supra 3.0 sports cars and got busy with a plan to increase horsepower by 30 to 40 percent. They added a Pure Turbo single turbo and two CSF high-performance intercoolers to the stock 3.0-liter, inline six-cylinder engine, then worked closely with one of the leaders in the import drag racing world, Titan Motorsports, adding a catless downpipe, 3.5-inch exhaust and an ECU tune. The result is a whopping 620 horsepower and 590 lb.-ft. of torque, compared to the 335 horsepower and 365 lb.-ft. of torque the engine makes from the factory.

The matching cars were revealed at the recent SEMA Show, riding on Mickey Thompson rubber at all fours corners: P305/45R17 ET Street S/S R2 compound radials on the rear, and 26×6.00R18LT Sportsman S/R radials up front.

“The GR Supra is a bona fide sports car worthy of the Supra name and at the top of our GR Gazoo Racing lineup,” said Lisa Materazzo, group vice president – Toyota Division Marketing. “And now our team has turned up the boost, giving fans yet another perspective of GR Supra performance through true 1/4-mile drag racers on a relatively small budget.”

This increased horsepower and torque only matter if the power reaches the pavement. The team turned to the experts at Weld Racing and Mickey Thompson Performance Tires & Wheels for the robust wheel and tire package to provide maximum traction at launch. At the rear is a set of 17×10-inch Weld Racing Belmont Beedlock wheels with 40 offset and 7.1 back spacing. Up front is a set of Weld Racing Belmont Drag wheels with -23 offset and 2.1 back spacing. Upgraded rear axles from The Driveshaft Shop complete the package.

Inside, fans will find…