Whatever triggered it, Verstappen’s defiance of his own team makes little sense · RaceFans 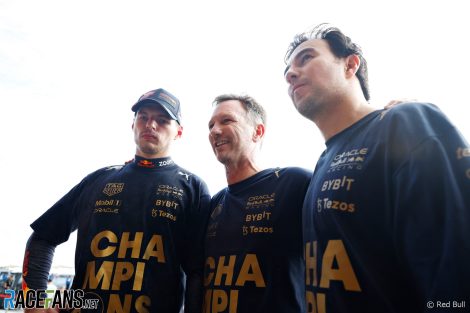 Until Max Verstappen surprisingly rebuffed Red Bull’s request to let his team mate past in the closing moments of the Brazilian Grand Prix, few would have suspected a rift between the two drivers.

After the race, Sergio Perez laid it on a bit thick over how crucial his support role had been to both of Verstappen’s championship wins. But there’s no doubt he has been closer to Verstappen’s pace than his previous team mates and that has proved valuable to the world champion at times.

Last year Perez repelled Verstappen’s title rival Lewis Hamilton with tremendous skill in the Turkish Grand Prix, delaying his rise through the field. He repeated the performance in Abu Dhabi, where Perez’s contribution arguably cost Hamilton so much time it later denied him the opportunity to make a pit stop onto fresher tyres and defend himself from Verstappen’s last-lap attack.

This year, too, Perez has played the obedient number two role when ordered. Red Bull team principal Christian Horner has lavished praise on the working relationship between his two drivers, most recently in an interview which aired over the Brazilian Grand Prix weekend.

“There’s a lot of respect between the two,” Horner told Channel 4. “They’re both at different stages in their careers. Checo is under no illusions of the challenge that he has in having Max as a team mate. But he also has enough confidence in himself and in his own ability.

“He’s made some incredible drives this year, he’s second in the world championship for a reason because he’s delivered at such a high level. The two grand prix victories that he’s had so far this year, both in Monaco and in Singapore, have been outstanding performances. Certainly earlier in the year he got on top of the car quickly, it suited him. That pole position in Saudi Arabia, again, another street circuit, another circuit that favours the brave, he was outstanding there.

But that camaraderie was conspicuous by its absence on Sunday evening at Interlagos.

Following a late Safety Car period, Red Bull told Perez to let Verstappen by in order for him to attack Fernando…