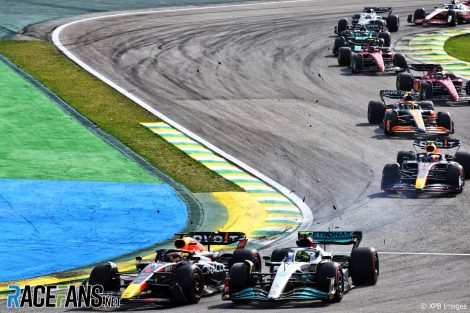 The 22nd and final grand prix weekend of the 2022 season sees Formula 1 arrive at the Yas Marina circuit in Abu Dhabi for the conclusion of the first season under its much-changed rules.

While the year may have belonged to Max Verstappen and Red Bull, the world champion will head to the final race knowing he will be facing fierce competition – both from the two resurgent Mercedes, and his own team mate.

Less than 12 months ago, the heavily-revised Yas Marina circuit was the scene of a championship conclusion so dramatic and controversial that it does not require yet another re-tread ahead of the sport’s return to Abu Dhabi.

But while the outcome of the most shocking finale Formula 1 has ever seen has long since been determined, Max Verstappen and Lewis Hamilton will arrive at the circuit one year removed from their showdown with their rivalry as alive as it perhaps has been ahead of any weekend during this 2022 season.

Hamilton and Mercedes have been no match for Verstappen and Red Bull throughout the majority of the season, as evidenced by Verstappen securing his second successive title in record-breakingly dominant fashion. But last weekend Mercedes managed to score an important first win of the season to boost their morale to a high that they will ride through the long winter into 2023.

During an eventful race at Interlagos, Verstappen was involved in two major flashpoints. The first occured at the restart following the early Safety Car period, when he and Hamilton collided at the apex of turn two, the pair refusing to give any more room to each other than they had at so many points throughout their infamous 2021 duel.

While Verstappen was blamed and penalised for the incident, it would have served to remind him of the kind of robust, wheel-to-wheel battles he can expect more of should Mercedes’ resurgence continue into this weekend and beyond. Mercedes have proven more of a threat to Red Bull over the last three rounds of the season than Ferrari have done and there’s no reason to assume that will not continue to be the case this weekend.

But it’s the re-emergence of Hamilton as a threat for victory which makes this weekend’s race such an enthralling prospect, particularly given what happened last year. No other pair of drivers have a rivalry quite as fierce as these two, and a final duel would serve to whet appetites for 2023.