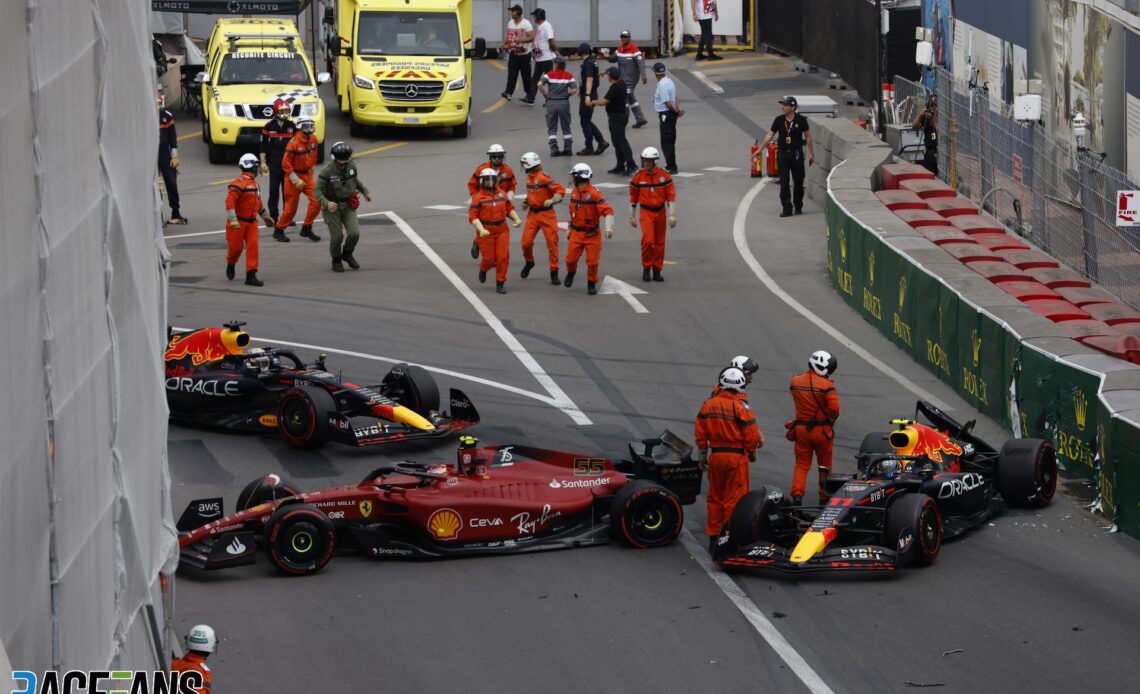 The Ferrari driver wants F1 to adopt a rule which penalises drivers if they trigger a yellow or red flag during qualifying. Similar regulations are already in place in other series such as IndyCar.

He believes such a rule would discourage drivers from crashing on purpose during sessions to trigger yellow or red flags in order to prevent their rivals from beating their lap times.

The debate arose amid speculation Max Verstappen raised objections within his Red Bull team about Sergio Perez’s driving in qualifying for this year’s Monaco Grand Prix. Perez crashed during his final run in Q3, which led to the session being red flagged and prevented Verstappen from improving his lap time.

Sainz, who crashed into Perez’s stricken car in the same incident, refused to indicate whether he believes the crash was deliberate, but wants F1 to introduce rules to stamp out any deliberate tactics.

“Without commenting if it was on purpose or not, I think it’s for real now that all drivers, we want some kind of a rule that if you generate a red flag or a yellow flag, even if it’s intentional or not, there should be something done to that driver,” he said. “Because you have compromised the other nine – on purpose, or maybe not – but you should get a penalty for it.

“If not, we’re all going to start playing with it. And I’ve seen over the last few years a lot more play around with it than what you might even have picked out in the media.”

Drivers are better placed to tell when drivers have crashed deliberately in qualifying sessions, says Sainz.

“I think all 20 drivers in ourselves, when we analyse these kind of incidents, we know immediately [if] the driver has done it on purpose or not because we’re not stupid,” he said. “But I’m not going to comment [on Monaco], it’s an incident of the past. I’m just going to say that if there would be a rule, it wouldn’t even go through your head.”

Penalising drivers for disrupting sessions could heighten the tension in qualifying sessions, Sainz added, “because it means that in Q3 there’s a lot to win, but also something to lose. So you need to put a really good lap together with no mistakes if you want to take pole position.”

The idea has been floated on past occasions, including last year, when Sainz’s team mate Charles Leclerc…