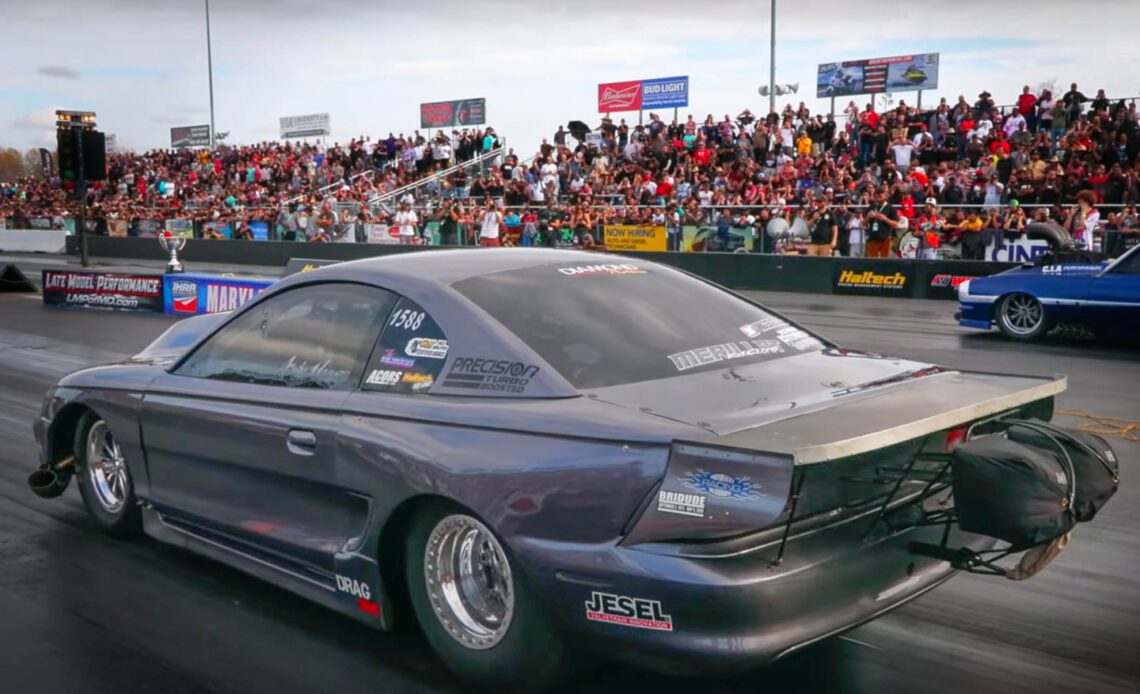 In today’s racing world, it seems that micro-records are brought up far too often. While many people start to departmentalize the track in order to secure a king of a certain record in a particular chassis, others have stepped into the light by achieving major records. These racers seek out the world’s quickest or fastest time slips with the only stipulation being that the build is class legal. Andy Manson is no stranger to this idea and after campaigning his supercharged small-block Ford, he’s now made the switch to a twin-turbo setup and recently became the world’s quickest small-block powered car on radials.

Andy Manson has made a name for himself campaigning his SN95 over the years. His DiSomma Racing Engine’s build has handled everything from a large supercharger to the recent build involving twin-turbos. Knowing the work that that DRE puts into every engine, you can bet this one is equipped with billet parts galore. Making sure the twin Precision turbos work in conjunction with the small-block engine is a Haltech that is tuned by PTPRacing.

While the twin-turbos and engine receives the majority of the attention, the chassis has been built to make sure the power is making its way to the dragstrip. In the rear, a TRZ Motorsports Fabricated Floating housing that still utilizes a stock style triangulated four-link is featured. The SN95 chassis is built and maintained by Chris Acors of Acors Performance, who is a dealer for TRZ Motorsports. This allowed Acors to spec out the winning combination for the rearend and keep a watchful eye on the gray streak as it blasts down the strip.

After seeing this car develop and win races over the years, it’s great to see Manson Racing take the title for a major milestone. While the car is known for making close to the 3-second eighth mile passes, its quarter-mile run is the one to snag the world’s quickest title after securing a 6.03 pass! The Ford powered small-block is now the world’s quickest small-block powered car on radials.