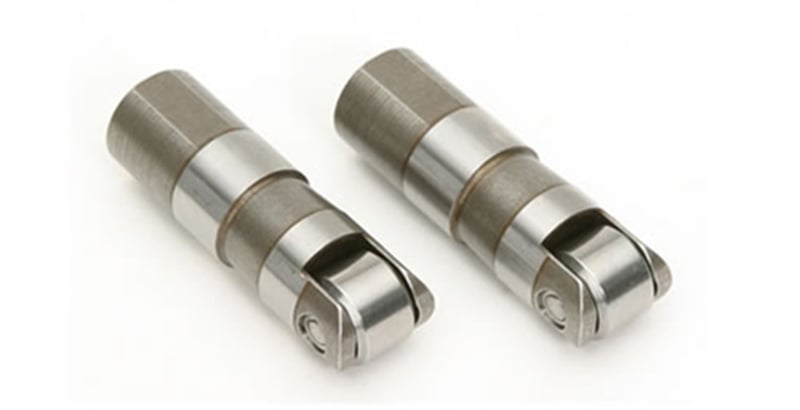 It’s amazing what a pushrod engine can do these days. The horsepower numbers coming out of LS engine builds are mind-boggling. The numbers get higher, yet these engines seem to ask for more punishment. Obviously, under these extreme conditions, the parts inside these engines, especially the valvetrain, are undergoing severe stress. And one of the parts that are continually managing all of that stress in a pushrod engine is the lifter. That little lifter is the unsung hero of the engine that ensures the valves open and close correctly and that the camshaft isn’t damaged as the engine temperature fluctuates.

These are two GM Delphi LS7 lifters. Many in the LS community utilize these in all their LS builds (they will drop into every iteration of the LS engine) because they are relatively inexpensive compared to aftermarket lifters and work great.

A lifter is a cylindrical piece of metal that allows oil to flow through it to hydraulicly control the valve lash and keep things smooth and quiet under the hood. The lifter sits on top of the camshaft and actuates the opening and closing of the intake and exhaust valves as the cam’s lobes rotate up and down. The idea of a lifter sounds like a relatively simple concept. I thought it was simple until I talked to the folks at Howards Cams and realized I had a lot to learn about lifters. Class is about to begin!

The camshaft is essentially the mechanical brain of the engine. However, it can’t do its job (of opening and closing intake and exhaust valves) without the lifter touching the cam’s lobes to make it all happen. Above is a photo of an LS camshaft from Howards Cams.

I spoke with Luke Bandt from Howards Cams. Luke is the tech extraordinaire at Howards Cams, and he filled my brain with more than I ever thought I needed about lifters. The first thing he educated me on was the fact that the lifter is part of a larger package, and to provide sound advice on choosing a lifter, he needs to know more about the camshaft being used, the weight of the car, and if you are going to race it. “If someone calls us and says they have a 6.2L Camaro, they want to have fun and do burnouts in,” said Luke. “I would pair them with a semi-aggressive cam for the street and put them on OEM-style performance lifters. That’s all he needs, and we can save him some money.”

Howards Cams sells tie-bar style LS lifters that delete the plastic tray holding the lifters in position. The tie-bar between the two lifters…