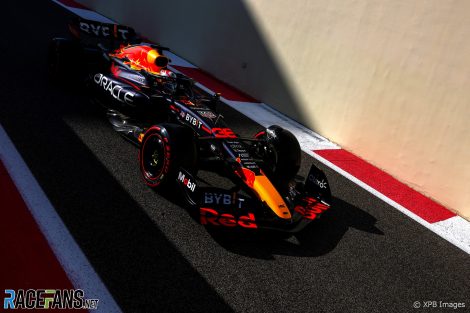 After knocking on the door of a possible first win of the season a handful of times after the summer break, Mercedes finally tore door off its hinges last weekend in Brazil by winning the sprint race and backing that up with a one-two victory in the grand prix.

As well as a reward for months of intense development, Mercedes’ victory was also strong evidence that they had finally overtaken Ferrari as Red Bull’s closest rivals at the front of the field, even if they still sit behind them in the championship.

But after Red Bull and Max Verstappen pointed to their set-up choice in Interlagos being a crucial factor in their defeat to Mercedes as they were locked into their setup from the end of the first practice, the question heading into the first day of practice in Abu Dhabi was how much would Verstappen be compromised this weekend by having to miss out on the first hour of running.

Fortunately for Verstappen and his team, Red Bull junior Liam Lawson successfully kept all four wheels on the circuit for the full 60 minutes of the earlier session. Once it was Verstappen’s turn in the evening, he duly delivered the quickest time of the day to sit more than three tenths ahead of last weekend’s winner, George Russell.

“It was alright, to be honest,” came Verstappen’s nonchalant response to sticking his car to the top of the times sheets on his only session of the day. “I think the car was in a good window. I think Liam did a very good job in FP1, just calm and steady – that’s all what we want, right?

“In FP2, no real problems. I mean, the car was in a good window. We tried a few things. And in the long run also the car was working quite well. So I’m pretty happy with that.”

Despite having won so many races since the end of the summer break, Verstappen has not always enjoyed a clear advantage over his rivals heading through a race weekend. But given the apparent margin he held on Friday, he was able to accept that he “should be” competitive heading into qualifying on Saturday and the race beyond it.

Looking at the times, it’s clear to see why Verstappen is happy. As well as being three tenths faster than the Mercedes over a single flying lap on soft tyres, Verstappen’s higher fuel run on the medium tyres looked rather favourable compared to Russell – the quicker of the two Mercedes drivers.