As Red Bull hold all the cards up front, the finale’s best fights are in the midfield · RaceFans 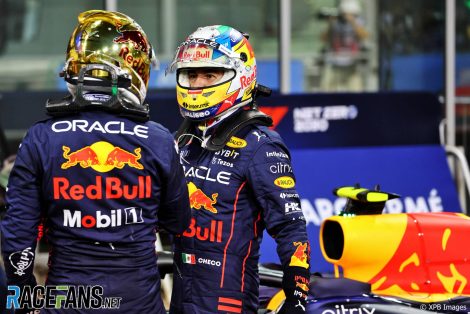 In what could go down as the most successful seasons any Formula 1 team have ever enjoyed, it’s strange to think that it took only until the final race of the 2022 season for Red Bull to secure their first front row lockout of the year.

With Ferrari and Charles Leclerc enjoying most of the success on Saturdays this season, Verstappen’s pole in Abu Dhabi was just his seventh of his second championship-winning campaign. With Sergio Perez taking second on the grid, Sunday’s race will only be the first time two Red Bulls have shared a front row since the 2018 Mexican Grand Prix.

Red Bull team principal Christian Horner has had a lot to cheer about over the course of the year, but he was unsurprisingly thrilled at the prospect of punctuating the season with Red Bull’s most dominant showing.

“We are tremendously happy with the performance as it gives us an opportunity to end our most successful season in the best possible way,” Horner said. “We couldn’t have asked for a better Saturday, but there is still a lot to do. Now we must focus on converting this into the best possible result.”

That Verstappen was the one on pole was of little surprise. What was unusual was that Perez had found the pace to back up his team mate and beat the Ferraris and Mercedes in the process. But part of that could have been thanks to with Verstappen himself. By giving Perez a tow along the two main straights, Perez was the only driver to break 330kph. Did that boost help him to secure a front row start?

“Yeah, it certainly did,” Perez said. “I think we worked really well as a team today. And I could feel, especially sector two, it was working. What you gain, you lose a bit in sector three, but generally, I think certainly it was a positive thing.”

The recent resurgence of Mercedes came to a halt in Yas Marina. Ferrari were closest to the Red Bulls on Saturday – a stark turnaround from how things looked just 24 hours earlier. But heading into the final race of the season, who did Verstappen see as the biggest threat to Red Bull – Ferrari or Mercedes?

“It’s difficult to tell at the moment,” Verstappen said. “I think, from our side, we looked good in FP2 with the long run and it seemed like both Ferrari and Mercedes seemed to struggle a little bit more at the time. But I don’t know what they have done overnight so I guess we’ll find out…