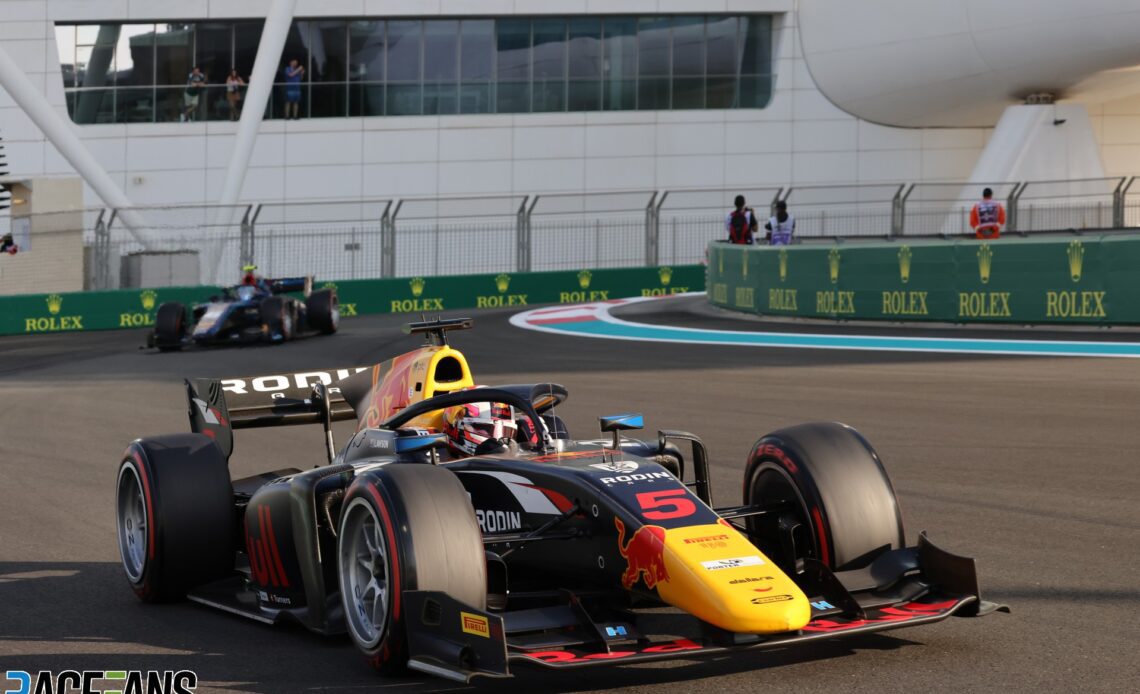 Richard Verschoor had taken partially-reversed-grid pole for the sprint race, Lawson sharing the front row with him after the two had set identical qualifying times. Amaury Cordeel and Dennis Hauger completed the second row while Williams junior Logan Sargeant, competing for his super licence, started fifth alongside Jack Doohan, the driver closest to him in the standings.

At the start, Verschoor kept the lead into turn one, with those at the front slotting neatly behind each other. However, the race was interrupted when Enzo Fittipaldi and Jehan Daruvala crashed into the barriers on the exit of turn two. By the time the pack reached turn six, a red flag was shown due to the extensive barrier repairs needed.

Both drivers were able to climb out of their cars, Daruvala with some assistance after his car embedded heavily in tecpro. After a lengthy stoppage for repairs, the race resumed with a rolling start, Verschoor holding the lead cleanly at the restart.

On lap ten, Lawson took the lead after Verschoor was seemingly caught unaware through turn six. Champion Felipe Drugovich claimed fourth position from Hauger on the opening corner of lap 17, as drivers started to visibly struggle with tyres, Cordeel sliding over the kerb ahead of the pair.

By lap 20, Lawson had drawn out more than a four-second lead, while Drugovich had moved to menacing Crodeel for third. Drugovich took the final podium spot through turn six on lap 21, Cordeel fighting back but unable to reclaim the place.

Lawson’s lead was over six seconds on the penultimate lap, while Hauger went off-track at turn six, attempting to overtake Cordeel for fourth. He surrendered the place back to Cordeel without letting Sargeant or Doohan through behind.

Drugovich was warned about track limits on the final lap as drivers began to struggle to control their cars on degrading tyres.

Hauger managed to take fourth from Cordeel through turn nine, as Lawson crossed the chequered flag to claim his fourth victory of the year. Verschoor and Drugovich completed the podium, with Sargeant’s sixth-place finish ahead of Doohan keeping him comfortably in line for his superlicense and 2023 Williams drive.