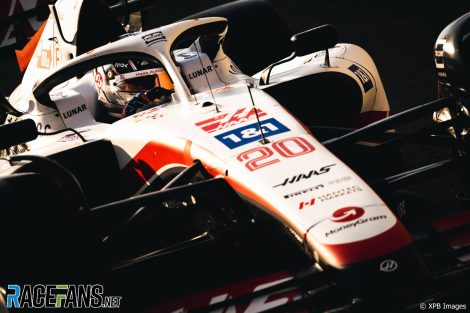 Verstappen secured the final pole of the season by just over two tenths of a second, while Perez secured an all-Red Bull front row. Both Ferraris locked out the second row of the grid, ahead of the two Mercedes of Lewis Hamilton and George Russell.

With the sun having already disappeared below the horizon, conditions were starting to cool when the opening phase of the final qualifying session of the season began. Teams took their time in sending their drivers out onto the track, with only the Aston Martins, AlphaTauris, Williams and Haas cars taking to the track.

Yuki Tsunoda set the early benchmark of a 1’26.135, before the front-running teams headed out for their first runs of the session. Red Bull, Ferrari and Mercedes all took to the track on soft tyres, and the world champions held a comfortable early advantage, Verstappen going quickest on a 1’24.754, just over half-a-tenth quicker than team mate Sergio Perez.

The two Ferraris of Carlos Sainz Jnr and Charles Leclerc were third and fourth, while the two Mercedes of George Russell and Lewis Hamilton well down in in fifth and seventh, split by Lando Norris’s McLaren.

All 20 cars returned to the pits with five minutes remaining in the first phase of qualifying. In his final qualifying session of his career, Sebastian Vettel was at risk of being eliminated in 16th position, as was Mick Schumacher, Valtteri Bottas and the two Wiliams of Alexander Albon and Nicholas Latifi.

Vettel was the first driver over the line to start his final lap and despite coming across a several slow-moving cars at the end of the lap set a time quick enough to go safe in fifth. The Williams pair failed to improve and were eliminated at the back of the grid, while Bottas could not get his tyres into the right temperature window in the queue and was knocked out in 18th.

Schumacher did put in a better lap at the end of the session and moved safe in 11th, which left Haas team mate Kevin Magnussen eliminated in 16th. In his final qualifying session for AlphaTauri, Pierre Gasly was knocked out in Q1 down in 17th place.

Mercedes wasted no time in sending both…