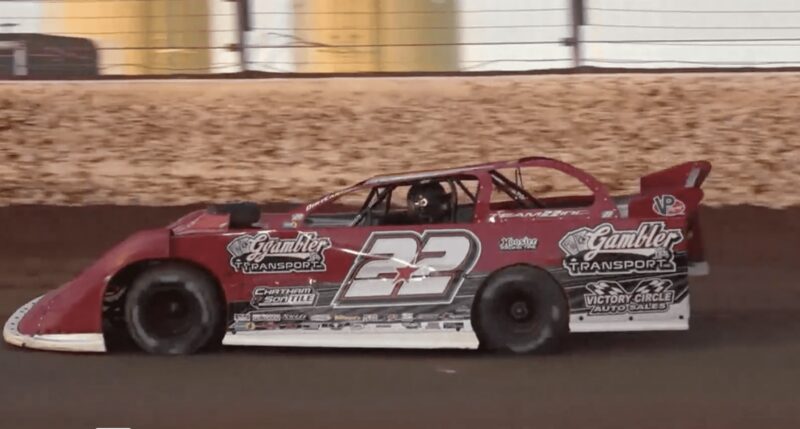 Payton Freeman emerged the only real winner of the Hunt the Front Southern Showcase, prevailing in a demolition derby at Deep South Speedway Sunday (Nov. 20).

Well, Sunday’s feature definitely wasn’t worth the 24-hour wait after Saturday’s scheduled race date was rained out. In a rough and tumble feature that mangled the field, young gun Payton Freeman scored the biggest win of his career, holding off Brandon Overton to win $22,000 in the Hunt the Front Southern Showcase feature.

🏁 @PaytonFreemanF1 Is the cream of the crop at Deep South Speedway! He takes the Hunt the Front Southern Showcase!

In a race plagued by yellow flags, the deciding lap in the 50-lap feature came on lap 26. Joesph Joiner, who had pounced from third to take the lead on the opening lap, had lost the lead to Overton before spinning in turn 4, drawing the caution while heavily damaging Spencer Hughes’s machine. Under that same caution though, Overton had to pit from the race lead with a flat tire, handing the point to Freeman.

From there, it was Freeman’s race to lose, and he didn’t. Navigating a treacherous set of bumps in turns 1 and 2, Freeman hit his marks just close enough to keep Hughes and Overton at bay. Though Overton stormed back to third and “drove the last 10 laps as hard as he could,” the high side of the track never came in and allowed Freeman to prevail on a final two-lap run to the checkers.

The win does provide major momentum for Freeman, who was recently signed by GR Smith to take over his Gambler’s Transport late model that plans to run a national touring schedule in 2023 (the ride was occupied by Ashton Winger for much of 2022).

It wasn’t worth money as much as Garrett Smith’s triumph in the Dirt Track World Championship last month, but for Freeman the Hunt the Front Southern Showcase victory may be every bit as valuable. Despite receiving very obvious aid both from Overton’s mid-race flat tire and a narrow racing groove, Freeman had every opportunity to miss his marks and hand Overton another big win, but he didn’t. Major score to close out 2022 for the No. 22 team.