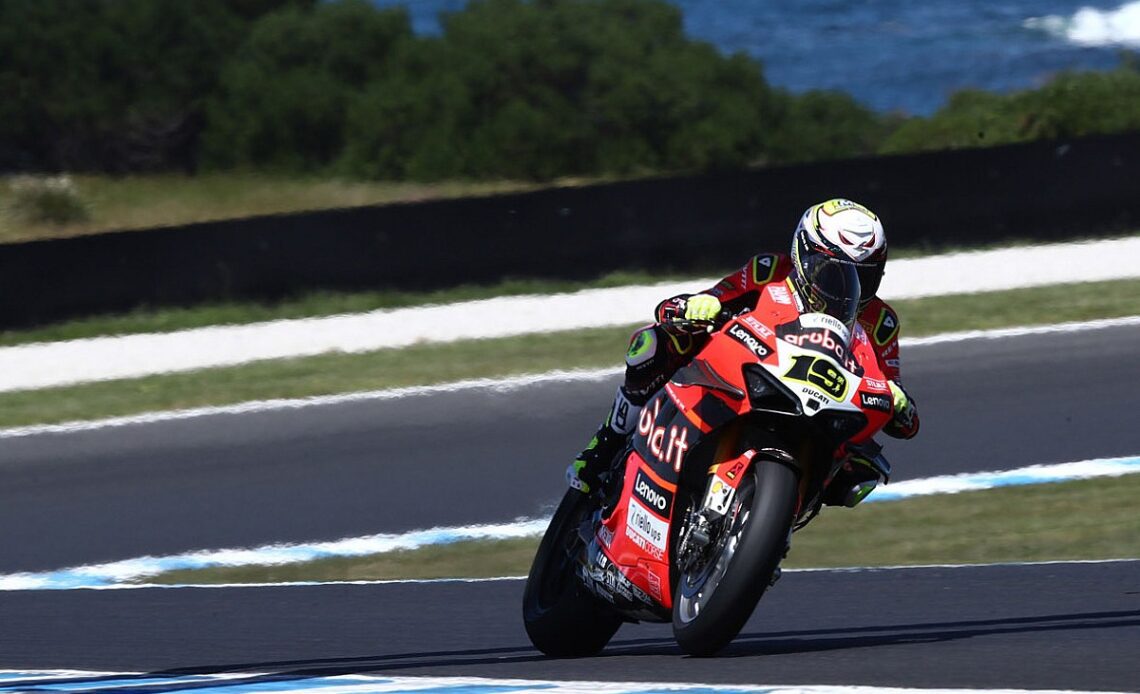 An incident involving Eugene Laverty and Xavi Fores at Turn 1, likely caused by spots of rain starting to fall at the Australian venue, prompted the race to be halted prematurely on lap 18 of 22.

As two-thirds distance had been completed, a result was declared, giving Ducati rider Bautista his 16th win of his title-winning campaign in anti-climatic fashion ahead of Kawasaki duo Rea and Alex Lowes.

In the only race of the weekend to start in dry conditions, Bautista led the pack away from pole position, but lost the lead into Miller corner (Turn 4) on the opening lap to Rea, with a fast-starting Scott Redding following through into second.

Bautista was then demoted a further position on the third lap as Lowes passed the Spaniard at the same corner.

However, the newly-crowned champion was soon back on the attack, repassing Lowes at Doohan corner at the start of the fifth lap before picking off a struggling Redding at the Southern Loop.

Making short work of the six-tenth advantage Rea had pulled out, Bautista then swept past Rea along the start/finish straight to move back into the lead at the start of the seventh lap.

From there, the rest of the race turned into a two-way fight between Bautista and Rea, with the Ducati man doing just enough to keep the lead Kawasaki at bay until the race was brought to a halt.

As the BMW of Redding slipped backwards, Toprak Razgatlioglu managed to get ahead of Lowes for what became third place, but the Yamaha rider was powerless to catch the top two, and had to work hard to keep Lowes behind.

Lowes finally got the move done for his second podium finish of the weekend at the start of lap 15, by which point he was two seconds adrift of the lead battle and with no realistic prospect of catching up.

Razgatlioglu concluded the season a muted fourth ahead of Yamaha teammate Andrea Locatelli, while Redding clung on to sixth place – a result that allowed BMW to leapfrog Honda for fourth in the manufacturers’ standings.

Honda’s chances of keeping the place took a blow on the opening lap as Garrett Gerloff (GRT Yamaha) ran into the back of the Fireblade of Xavi Vierge at the Southern Loop, both ending up in the gravel.

Injury stand-in Tetsuta Nagashima did a stoic job upholding Honda honour, but could manage no better than ninth place behind the Ducatis of Michael Ruben Rinaldi and top independent Phillip Oettl (Go Eleven).

Loris Baz completed the top 10 on the Bonovo BMW, but there was concern for the…