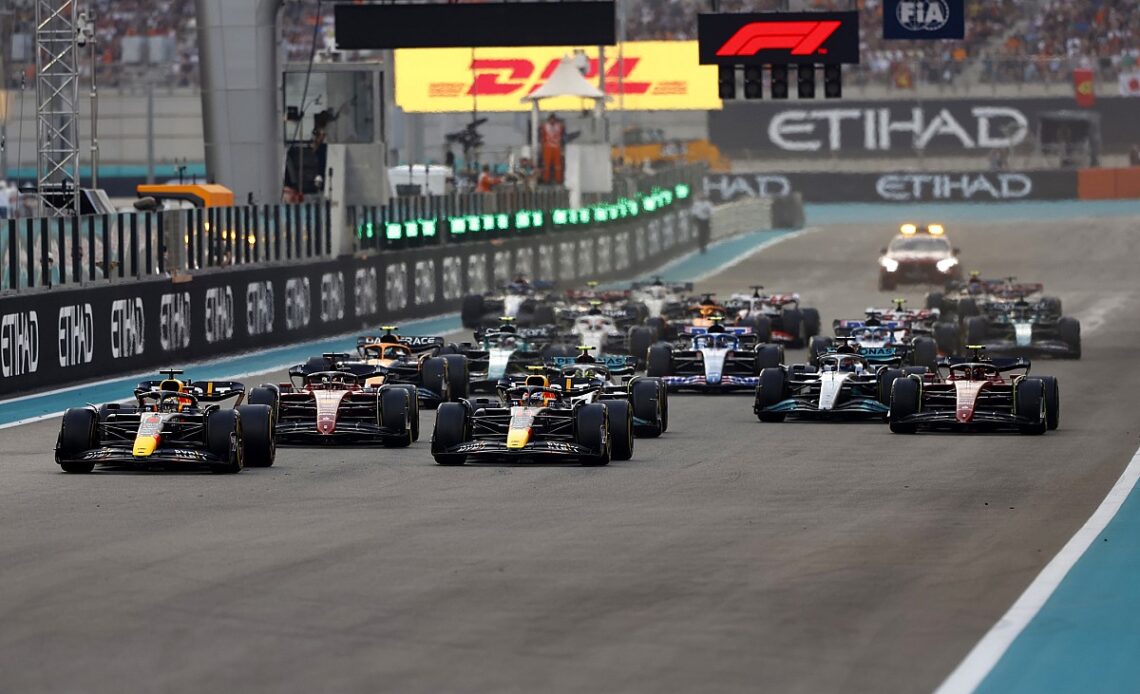 Verstappen led from the start of the race, only giving up his lead briefly to Ferrari’s Charles Leclerc in the pitstop cycle. The race was spiced up by divergent tyre strategies between Leclerc and the second Red Bull of Sergio Perez in their fight for second in the World Championship.

The one-stopping Leclerc was caught by two-stopper Perez in the closing stages, aided by tyre information from Verstappen, who was also on a one-stop out front.

But Perez just couldn’t get close enough to attempt a move, so Leclerc took second by 1.3s, both in the race and the points.

Verstappen just held his pole advantage on the run to Turn 1, the majority of the field starting on the medium-compound tyres, ahead of Perez, Leclerc, Lewis Hamilton (Mercedes) and Carlos Sainz (Ferrari). On the run to Turn 6, Sainz lunged inside Hamilton and sent him wide on the exit, the Mercedes briefly being sent airborne over the kerb.

Hamilton initially kept his position, after straight-lining the apex of Turn 7, but was asked to allow Sainz back in front, which he did on Lap 4. A lap later, Hamilton DRS-ed past Sainz into Turn 9, but Sainz stayed in DRS range and repaid the favour at the same corner four laps later.

In the second Mercedes, George Russell then overtook Hamilton – who was complaining of a loss of power – for fifth.

Verstappen pulled out a 2.7s lead over Perez by Lap 10, with Leclerc and Sainz equidistantly spaced by 3s behind them. Behind the Mercedes duo, Lando Norris ran seventh for McLaren, while, in his last-ever Grand Prix, Sebastian Vettel duelled with the Alpines of Esteban Ocon and Fernando Alonso.

Ocon was the first of the top 10 to pit for hard tyres on Lap 15, followed by Perez and Russell (who had a very slow stop and was released into the path of Norris, resulting in a 5s time penalty) a lap later. Perez rejoined battling Vettel, which cost him time in his battle for second with Leclerc – both in the race and the World Championship standings.

Sainz pitted on Lap 18, and also got caught up behind Vettel, as Verstappen and Leclerc ran long in the top two spots. Verstappen stopped on Lap 20, allowed Leclerc to lead until he pitted two laps later. A slow stop meant he rejoined just in front of Sainz but way behind Perez, who caught Verstappen in this stint and was 2s behind his teammate by half distance.

Leclerc closed up on Perez, who pitted again for…