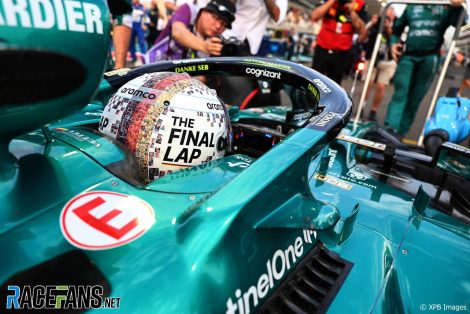 After taking his 15th win of the season in Abu Dhabi, Max Verstappen says Red Bull’s success this season will be difficult to repeat.

“It was a good race,” he said after climbing from his RB18. “It was all about tyre management. I think we looked after the mediums quite well and then on the hard tyres it was literally managing from lap one until the end.

“Incredible, though, to win again here. The 15th win of the season, it’s unbelievable.”

He finishes the season on 454 points – the most ever scored by a driver in a single season – with a 146-point lead over second-placed Charles Leclerc.

“It’s been really enjoyable to work with the whole team and to be able to achieve something like this this year,” reflected Verstappen.

“I know it’s going to be hard to replicate something like this but it’s also very good motivation to try and do well again next year.”

Team mate Sergio Perez, who was beaten for second place in the drivers’ title by Leclerc, said he believed Red Bull had more performance yet to find. “Certainly we had great moments, great battling.

“I struggled a bit with the tyres for this year, in terms of managing the tyres in the race, so hopefully that will be something we can improve for next year and just generally be a bit stronger.”

Leclerc said he was “really, really happy” to have made a one-stop strategy work and seal second place in both the race and the standings. He said Ferrari must carry its late-season momentum into 2023.

“I really hope next year we can do a step forward in order to fight for the championship,” said Leclerc. “But considering where we were last year it’s a really big step forward.

“I think we improved towards the end of the season, in terms of strategy which turned into work in terms of race pace because coming the Sunday we seemed to struggle a bit more. But we will push during the winter break in order to catch them back a little bit.”