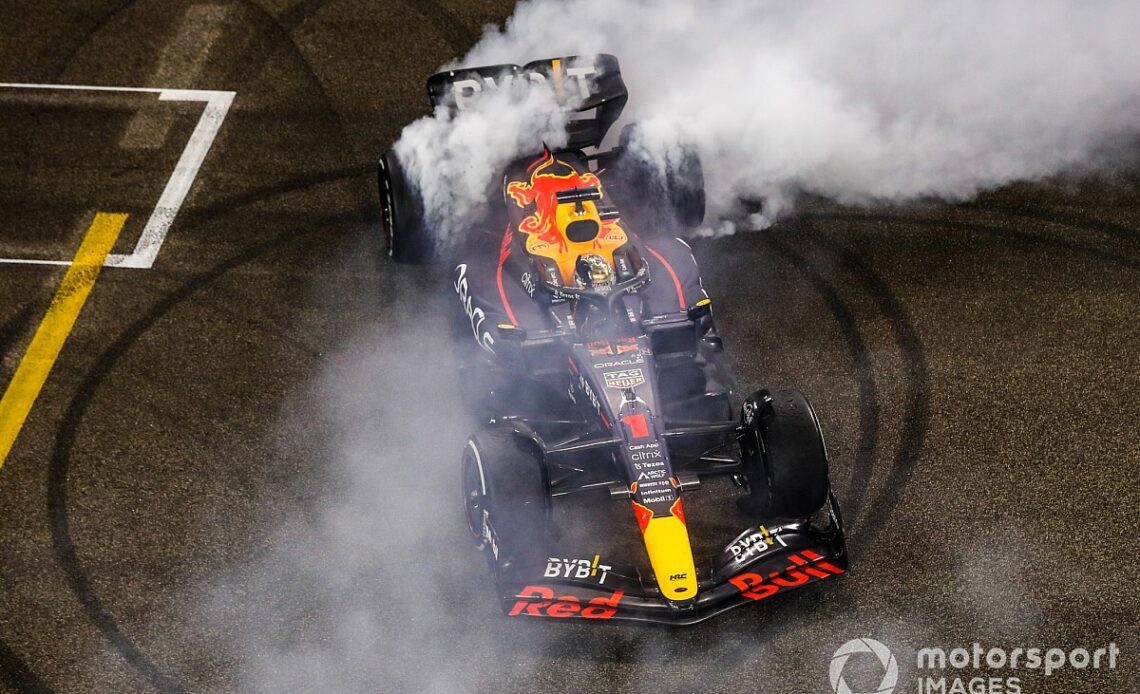 With Verstappen in command up front and the two Mercedes cars in the wars, the main interest in the race boiled down to a strategy offset between the one-stopping Leclerc and the two-stopping Perez in a tense final stint.

At the start, Perez launched well off the line to have a look down the inside of polesitter Verstappen at Turn 1 but was never a serious threat, while Leclerc held his third place starting spot and Lewis Hamilton beat Carlos Sainz into fourth.

Leclerc had a small look at attacking Perez into the Turn 5 hairpin further around the opening lap, but the initial action then became Sainz re-attacking Hamilton into Turn 6 at the end of the Yas Marina track’s main back straight.

The Ferrari got alongside under braking at the left-hander and he edged Hamilton off over the kerbs, where, like against Verstappen in 2021, the Mercedes scampered over the run-off after briefly getting airborne and held fourth.

As the Red Bull duo eased away from Leclerc, who was then being hounded by Hamilton, the stewards cleared Sainz of forcing Hamilton off and instead looked at whether the Briton had gained by cutting the Turn 7 run-off.

Mercedes, therefore, ordered him to give Sainz the place back, which gave Leclerc breathing room.

He nevertheless dropped back from the leading pair across the first phase of the race, before Verstappen began to drop Perez and Leclerc homed back in.

Perez became the first driver to stop on lap 15 of 58 to go from mediums to hards, while Verstappen and Leclerc stayed out for five and six further laps respectively to do likewise.

That gave them a tyre life advantage over the Mexican for the second stint, Perez also having lost time battling with the one-stopping Sebastian Vettel with a Turn 6 lock-up and off on his out lap.

Leclerc had emerged from his stop just ahead of Sainz – another early stopper – and he then began to reel in Perez with a series of strong laps.

The Ferrari’s pace was so strong that he got to just 1.5s behind Perez and was ordered to “box opposite” the Red Bull on lap 33 – the undercut being very powerful and leading Perez’s team to pit him on that tour.

Ferrari then asked Leclerc if he could sustain his pace and tyre life to the finish on a “Plan C” one-stopper, which he reckoned he could just about manage.

Leclerc’s charge to reach Perez had brought him to around five seconds back from Verstappen by the time Perez stopped, but the leader, by now set on the same one-stopper,…