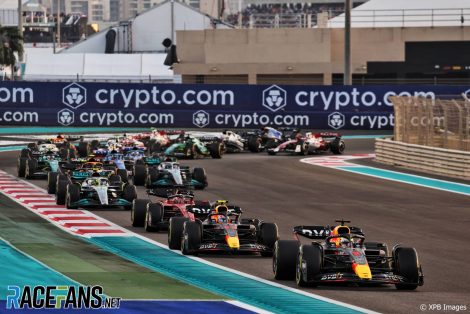 At the end of one of the most successful seasons that any Formula 1 driver has ever had, the final race of the 2022 season in Abu Dhabi could have been little more than a parade of honour for Max Verstappen.

The world champion would receive his fully-deserved plaudits. But despite taking pole position and looking set to disappear off into the Abu Dhabi sunset to take a record-extending 15th win of the season, Verstappen would not be the focus of the final round of the season.

At the end of a career spanning 15-and-a-half seasons and almost 300 races, Sebastian Vettel would climb into his Aston Martin for the final time and climb out of it a retired Formula 1 driver. One of the sport’s most successful ever competitors had one last mission for his final 58 laps – secure sixth place in the constructors’ championship for his team by beating Alfa Romeo.

At McLaren, Daniel Ricciardo was also staring down what could be his final race start – except not through his own choice. With a slim chance of chasing down Alpine for fourth place, McLaren at least had a goal to strive for with a driver they had grown so fond of over their two years together.

Of far less consequence, Sergio Perez and Charles Leclerc would line up next to each other behind Verstappen at the front of the grid. Whoever finished ahead would take second place in the championship and earn little more than bragging rights – as much as one would wish to brag about being the first driver to lose to Verstappen. But after an internal squabble between the Red Bull drivers had exploded publicly just a week earlier, Perez had every reason to be focusing more on his team mate ahead at the start than the Ferrari behind.

In the end, the fight for the race win lasted only as long as the 300-metre run from the start line to the first corner. Perez had a half-hearted look at his team mate and kept his nose to the inside of Verstappen through the left-hander, but Verstappen’s lead was never truly in doubt. Slotting in behind, Leclerc held onto third as the pack snaked up the hill and through the opening sector for the first time.

Lewis Hamilton leapt from fifth on the grid to move ahead of Carlos Sainz Jnr into the first turn, but Sainz was in no mood to follow a Mercedes for the evening. Heading down the first back straight, Sainz launched his Ferrari to the inside of turn six, with Hamilton clattering over a sausage kerb at the exit and cutting the second…