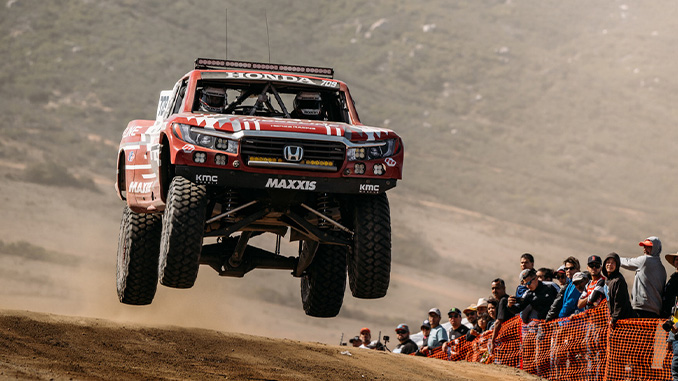 The Honda Off-Road Racing Team returned to Baja California this weekend, with the Honda Ridgeline Baja Race Truck taking Class 7 honors for the second consecutive year in the 55th running of the iconic Baja 1000.

The Ridgeline started off strong, with starting driver Proctor building an early lead, before handing off to Prescott at the 242-mile mark. The Ridgeline continued to stretch is Class 7 lead into the night, as Glaszcak assumed the driving duties just before 8:30 pm PT.  Even a mild roll-over in the early-morning hours failed to significantly slow the Ridgeline, as the truck pressed on with only minor body damage.

The Ridgeline reached the finish with a time of 21 hours, 42 minutes and 56 seconds to claim the Class 7 win by a dominating margin of more than five hours; adding victory in this year’s “Single Loop” event to the Class 7 win in 2021’s “Point-to-Point” race from Ensenada to La Paz.

Jeff Proctor (team owner/driver Honda Ridgeline Baja Race Truck) won Class 7 for unlimited V6 Trucks for the second consecutive year: “You know, Baja never disappoints. It’s always full of excitement, and this race was no exception for us. It was tough. There was a lot of attrition, we saw a lot of broken competitors out there. It had every single element you can imagine. But this Ridgeline is so tough, it fought through everything to get to the finish.

“This was a bittersweet race for me. I’m going to be stepping back from driving duties next season. So this was probably my last time behind the wheel, and we were able to put the Ridgeline [in winner’s circle]. I couldn’t be more proud of our whole team. We’ve got some exciting plans coming out in the next three-four weeks. We’re going to announce our [2023] schedule and our new driver. I’m going to be assuming the role of team principal/team manager….