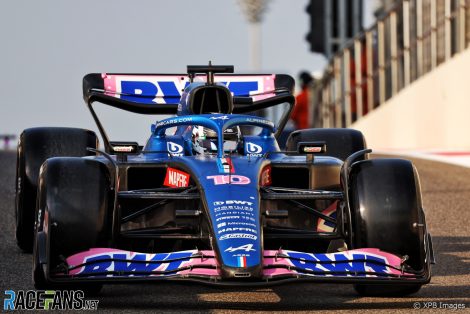 In the round-up: Nico Hulkenberg admitted to “a bit of human degradation” after a long day in the cockpit during Formula 1’s post-season test at Yas Marina Circuit.

Yesterday’s nine-hour test marked the first time Hulkenberg had driven an F1 car since August as he prepares to return to the championship with Haas next year. Although he lost over an hour of running due to power unit problems, he completed 110 laps, slightly less than twice the distance of the Abu Dhabi Grand Prix.

“It was a good day of work, good running, collected many impressions and a lot of data – which was the target. We successfully went through our programme,” said the 35-year-old, who has started 181 races. “Today was about learning the tyres for 2023, learning their characteristics. With these test days you have a bit more time to try stuff. I’m satisfied and happy with the day.”

After spending a year driving a car he could only get into the points six times, Pierre Gasly was impressed by the machine that finished fourth in the constructors’ championship after his first test for Alpine yesterday.

“It was a fantastic feeling to drive the A522 for the first time, and, I must say, it’s an impressive car,” Gasly said.

“The objectives for me today were all about getting used to my new surroundings, working closely with the engineers and, generally, building up my learning in the car and getting an understanding for its characteristics. We completed many laps – as per our plan – and I’m already very excited to fully embed myself in the team.”

“The new compounds still tend to be quite close, as they were this season, but the front is a little bit stronger than the 2022 versions,” he said after a morning spent driving with the tyres.

“We are working with the tyres in very hot conditions here and everything is still early days,…