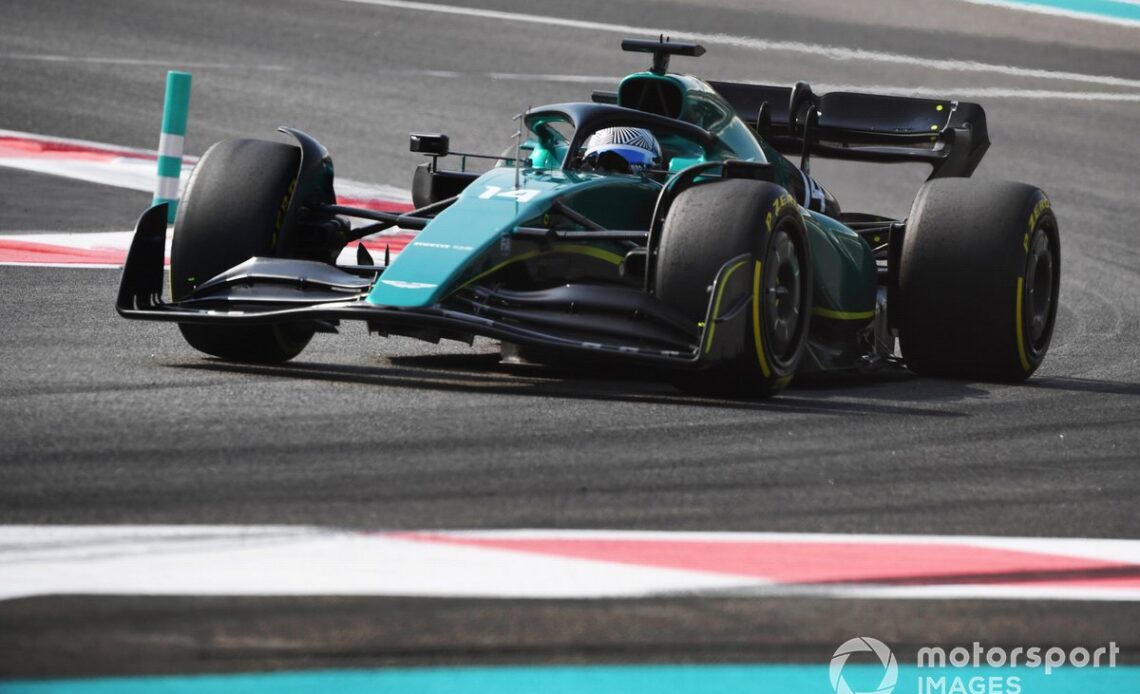 As 9am came around and the light at the end of the pit lane went green, Alonso immediately peeled out of the Aston Martin garage, running in a sponsorless livery, blank overalls and a camo dazzle helmet, and was the first man out of the pit lane.

He did the same when the session resumed after a red flag for Oscar Piastri’s stoppage in the third hour. But was it a coincidence?

“No,” he said. “And yesterday here, in the paddock.” Again, he was the first man in. Clearly, there was no time to waste.

Less than 18 hours after making his final Alpine appearance in the F1 season finale, Alonso was already starting life with Aston Martin by completing a seat fitting on Monday and getting to know his future colleagues. Although he will not officially start until 1 January, Alonso knew the test would be an important chance to get ahead of the game for 2023.

The primary reason for Tuesday’s running at the Yas Marina Circuit was to sample the Pirelli tyres and help young drivers – not including Alonso, as it did in 2020… – get some more track time. But there were still a few things we could glean from Alonso’s first test for Aston Martin, and some early signs of what we could expect from the new partnership.

The first test only further justified the move to Alonso

When the first opinions were cast about Alonso’s decision to ditch Alpine for Aston Martin in 2023, one of the simplest questions was: why leave a team fourth in the championship for the one in ninth?

Alonso always said it was about the potential that Aston Martin was showing, the team setting ambitious targets under Lawrence Stroll’s ownership. The construction of a new factory at Silverstone is ongoing and, by all accounts, moving at impressive speed. The team recognised where it went wrong with the new regulations, but showed good flexibility in reacting to mount a late charge that left it just a point away from beating Alfa Romeo to sixth in the standings.

Alonso said after the test that he was “90% happy” when he signed the deal with Aston Martin in late July, the lingering 10% perhaps a result of the lack of performance there had been through the year up to that point. “When they started improving and finished the season on a high, I was 100%,” he explained. “This morning, I was 100 and now I’m 100-plus.”

Although Alonso noted the car philosophy was “very different”…