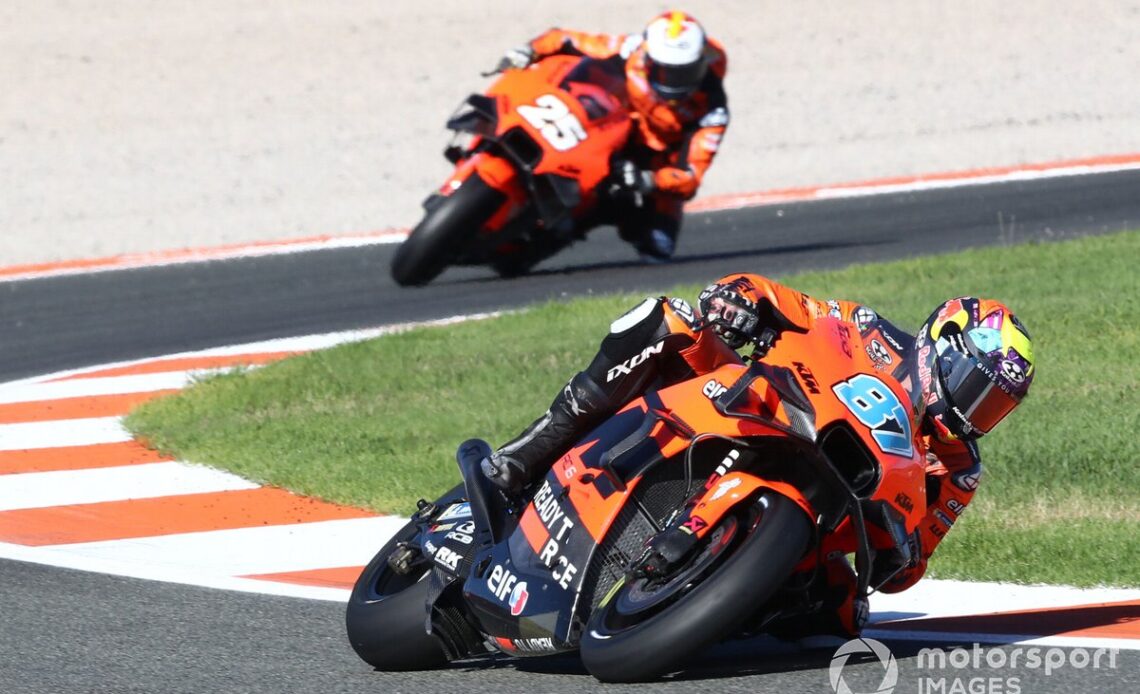 Gardner – son of 1987 500cc world champion Wayne – stepped up to MotoGP with Tech3 and KTM this season as reigning Moto2 champion.

PLUS: How KTM failed one of its brightest MotoGP prospects

But the Australian struggled all year aboard the RC16, scoring a total of just 13 points from 20 races and a best result of 11th.

Gardner was informed mid-season that he would not be retained by KTM for 2023, with the Australian telling media at the San Marino Grand Prix that he had been ousted having been told he is “not being professional enough”.

He will move to World Superbikes next year with GRT Yamaha, and said after his final MotoGP race in Valencia that he is glad to see the back of the KTM bike.

“I just went out and did the race as good as possible,” Gardner said after Valencia.

“I think the last three races, our first laps, have been pretty sick. The same thing has just been happening, our rear tyre has been dropping.

“But Phillip Island was pretty awesome, Sepang the first few laps were great as well.

The souring of the KTM/Gardner relationship still isn’t fully clear as to how it happened, with it thought to have stemmed from criticism he and his manager Paco Sanchez made to the press about the bike – with Gardner saying the lack of professionalism comment came from road racing vice president Jens Haibach.

Gardner says he was sat down by KTM’s motorsport boss Pit Beirer but there’s never been a proper explanation still.

“Pit sat me down but couldn’t really tell me anything. It was like ‘yeah, sorry, but that’s the way it is’,” he said.

In an exclusive interview with Autosport, Beirer says he does regret what happened with Gardner, taking aim at his manager Sanchez for not helping the situation.

“Yes, because he’s a world champion in our family and we couldn’t make it work,” Beirer said when asked by Autosport if he regrets how the relationship with Gardner ended.

“Why? This would be a longer discussion, but I’m really sad we couldn’t make it more successful.

“We had high motivation to do that and it didn’t work out well from both sides. When we had to make a future plan, it was not helpful that his management told the press that KTM contracts…