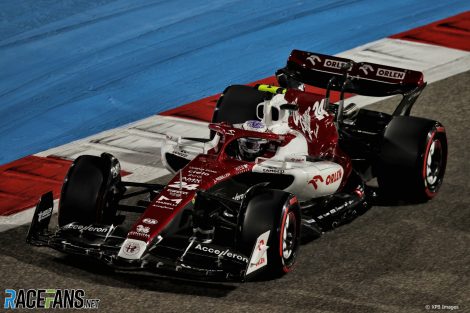 When 2021 Formula 2 racer Zhou Guanyu was confirmed for the final spot on the 2022 F1 grid just over one year ago, reactions from RaceFans readers were mixed.

Some welcomed the driver that sat in second place in the F2 standings would be promoted into Formula 1. Others were not so thrilled. “Fairly ordinary,” came one assessment. “I can’t say I’m too excited by this news,” expressed another.

But anyone who expected China’s first ever F1 racer would be one-and-done in the world championship was proved wrong when Sauber confirmed in late September that the 23-year-old would remain with the team during their final season as Alfa Romeo in 2023.

With his future in Formula 1 secured for at least another 12 months, it’s no wonder he’s so relaxed as he sits down with RaceFans for an exclusive interview just days away from the end of his rookie season in Formula 1.

Even reaching F1 is an achievement millions of young people dream about but only a handful ever achieve. So how does it actually feel to wake up every morning and think to yourself ‘I am a Formula 1 driver’?

“The reality is actually more or less very similar to what I expected,” Zhou replies casually.

“Firstly, when you knew that this year you’d be a Formula 1 driver, that’s something kind of a dream come true – you can’t believe it. It takes a couple of weeks, even one or two months to digest that. But then once everything becomes real, the first few grands prix, still that doesn’t feel real.

“When you are sat there with all the other 19 drivers to be part of it – it’s a really amazing and honoured moment,” he continues.

“When I was a kid, I was watching, hoping that I would be standing there one day. And then the moment when things start working and you try to push through all this new involvement, new team and this new whole chapter – it definitely has some, let’s say, tough moments. Hard moments. But you really have to push through it.”

Zhou’s 2022 has been the most intensive season of racing he’s had since first stepping up to single seaters in German and Italian F4 back in 2015. He readily admits how intensive the life of a Formula 1 driver is, but insists it’s of no surprise to him.

“I definitely expected that,” he says. “From Formula 2, you spend half a year doing not much at…