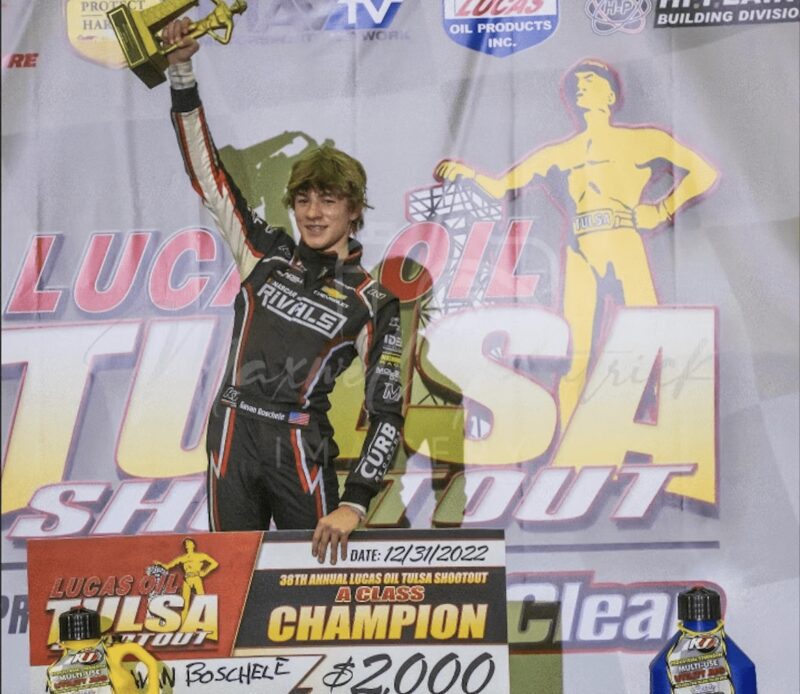 With more than 360 cars entered for this week’s Chili Bowl Nationals, there’s no shortage of talent coming to the Tulsa Expo Center.

It’s easily arguable that this is the most wide-open Chili Bowl field in recent memory.

Anyone who follows midget racing by this point knows who Boschele is, even at the ripe age of 14. Boschele is no stranger to victory lane in midget racing, having won a feature in the inaugural visit of the Xtreme Outlaw Series to Millbridge Speedway last May.

14-year-old @WatchGavanRace of Mooresville, NC is the first-ever winner with the #XtremeMidget Series presented by @Toyota!

Rewind to the Chili Bowl a year ago and Boschele proved racy enough to make a B-main. Now fast forward to 2023 and momentum is on his side, having scored his first career Driller in the Tulsa Shootout two weeks ago after a hard-fought (and clean) battle with good friend Jace Park.

🏁 @WatchGavanRace WINS the first Driller of the 2022 @TulsaShootout in exciting fashion!

“We talked about the whole week about sliding each other for the win, starting on the front row, so it was kind of cool that it actually happened,” Boschele said of his late-race triumph. “We never thought that we’d be side by side racing for a Driller.”

Speaking to Boschele last week, the young driver was adamant that having one of those coveted Driller trophies in his pocket wasn’t going to change his approach to the upcoming Chili Bowl, even if the win left him more confident. What’s more, a revamped Chili Bowl format that has seen practice moved from Monday to Sunday isn’t changing his approach either; Boschele is slated to run his qualifier on Monday night (Jan. 9), the opening night of competition for the week-long event.

“Last year Keith (Kunz, car owner) picked that date for us because we had practice late that morning and then raced…