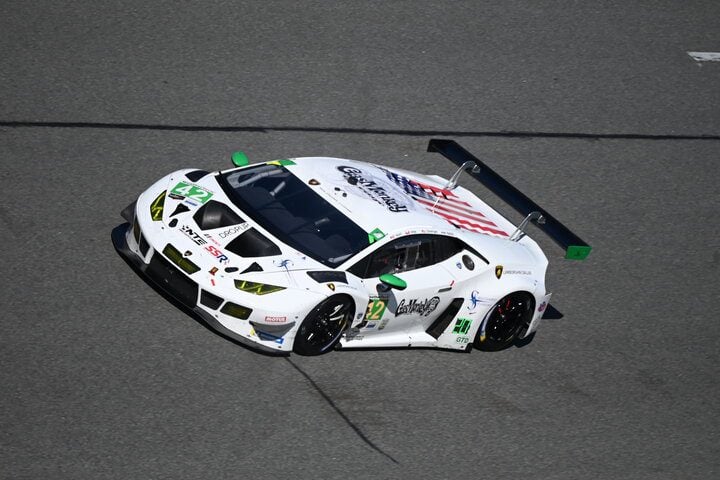 NTE/SSR announced their plans for the early portion of the 2023 IMSA WeatherTech SportsCar Championship season Monday (Jan. 9). The team has upgraded to the new Lamborghini Huracan GT3 EVO2. Jaden Conwright and Don Yount will be back in the No. 42 Lamborghini. They’ll be joined by two newcomers, Alessio Deledda and Kerong Li.

“The Rolex 24 field is at capacity, and it’s such an honor for NTE/SSR to be included in such a prestigious event against some of the world’s best teams and drivers,” stated Paul Mata, NTE/SSR team principal. “I got my start as a mechanic and to now be a team owner, competing against this field with such a strong lineup really calls the best out of each and every person at NTE. We’ve proven to be competitive against many of these teams, and now we are ready to fight for our place on the podium of an important event. I believe we have the lineup to make that happen.”

Conwright is the 2022 IMSA Diverse Driver Scholarship winner. He will still receive benefits in his second year, namely a reduced price full season entry, an extra set of tires for each race weekend and free hospitality passes for sponsors.

“I’m really looking forward to returning to the Rolex 24 At Daytona with NTE/SSR,” Conwright said. “Last year we had a really solid race going until the issue 19 hours in, so I feel like we’re heading back with some unfinished business. Now that we’ve had a year to improve and develop, I think we’re much more prepared to tackle this difficult race. Looking forward to finally hitting the track in the new Lamborghini Huracan GT3 Evo 2 during the Roar Before the 24.”

Yount will be making his eighth Rolex 24 start and the third in a row with NTE/SSR. His best finish is a third in the PC class back in 2017. In Yount, Conwright has a teammate that he has raced with in IMSA since 2021, in both WeatherTech and Lamborghini Super Trofeo North America. Frontstretch sat down with Conwright a while back and we will bring you a feature based on that interview in the next couple of weeks.

Of the two newcomers, Deledda has the most varied resume. He comes to the team after racing a Lamborghini for GRT Grasser Racing Team in DTM last season, his first year in sports cars. He earned only one point in 16 races, finishing 26th in points. Prior to 2022, Deledda raced in Formula 2 for HWA RaceLab. He failed to score a point during the season and had a best finish of 12th in the second sprint race at Monaco. As DTM is a…