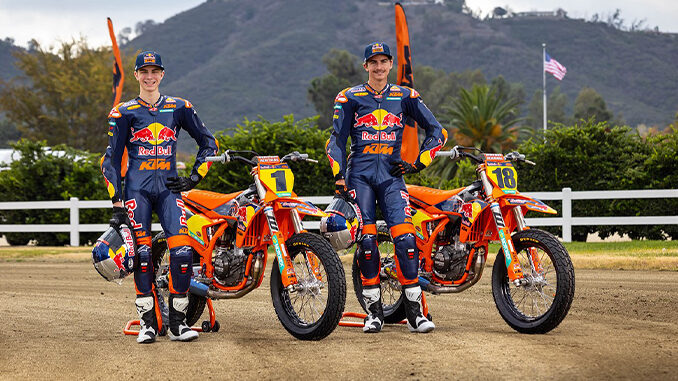 MURRIETA, CA – January 11, 2023 – (Motor Sports NewsWire) – A new racing season is underway in 2023 and Red Bull KTM Factory Racing’s Flat Track team has been hard at work preparing for the upcoming American Flat Track Championship. Reigning AFT Singles Champion, Kody Kopp, will proudly display the No. 1 plate aboard his KTM 450 SX-F in 2023 as he returns to defend his first title in the class, alongside fierce championship contender and teammate, Max Whale.

With Kopp leading the charge in 2022, the Red Bull KTM Factory Racing duo amassed eight race-wins and 10 podium finishes in AFT Singles competition, delivering two top-five finishes in the overall championship standings. For the now 18-year-old Kopp, championship management was in full effect through the latter half of the year, and he did what he needed to do to clinch his first-career title in his first year with the team. Showcasing impressive speed and skill across all tracks and racing conditions, Kopp has his sights set on upping the ante in 2023.

Kody Kopp: “The 2023 season is here and so are the new KTM 450 SX-Fs! I am really liking the new bike and I am confident we are going to pick up right where we left off in 2022, with winning the AFT Singles Championship. It’s the first time in my career that I will get to run the #1 plate and I don’t have plans on letting go of it anytime soon.”

Heading into his third year with the team, Whale looks to build upon his strong showing in the first two seasons aboard the KTM 450 SX-F. The aussie came out swinging in 2022, finishing on the podium in four of the first five races, before a mid-season knee injury kept him off the grid for two rounds. Clawing his way back to the center of the podium with a significant win at the Peoria TT, Whale finished the season strong with a top-five overall.

Max Whale: “The 2023 season, what’s there not to be excited for? The team is on the all-new and improved 2023 KTM 450 SX-F. We have the same team as last year, so I’m super excited. Kody and I had a great year last year, we were both inside the top five with Kody winning the championship. Missing a few rounds definitely hurt my overall points, but needless to say, our team was the most dominant singles team there was. To say I’m more than excited for next year is an understatement. I’m definitely working as hard as I can, and I just want to be on top in 2023. I have…