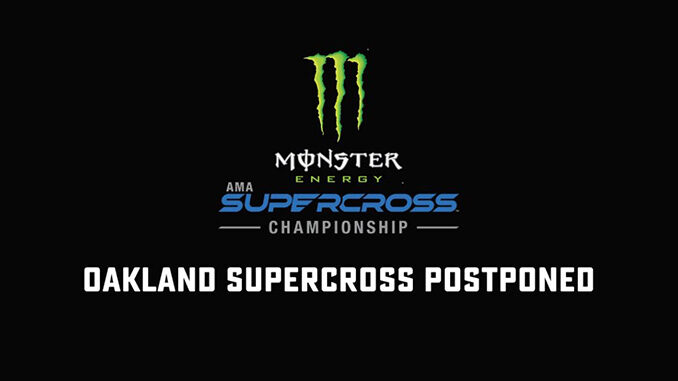 PALMETTO, FL – January 11, 2023 – (Motor Sports NewsWire) – Due to the severe weather conditions afflicting Northern California, Round 2 of the Monster Energy AMA Supercross Championship scheduled on Saturday, January 14 at RingCentral Coliseum in Oakland, California is being postponed. The safety of our athletes, teams, operational and television staff, and fans is always our foremost concern.

Feld Motor Sports is currently working with RingCentral Coliseum to find an alternate date that works within the already announced 2023 Monster Energy AMA Supercross Championship schedule. Ticket purchasers can visit SupercrossLIVE for the most up to date information regarding this postponed event.

Round 3 of the Monster Energy AMA Supercross Championship will continue next Saturday, January 21 at Snapdragon Stadium in San Diego, California.

Monster Energy AMA Supercross is the most competitive and highest-profile off-road motorcycle racing championship on the planet. Founded in America and sanctioned by the American Motorcyclist Association (AMA) since 1974. Over 17 weeks, Supercross attracts some of the largest and most impressive crowds inside the most recognizable and prestigious stadiums in North America to race in front of nearly one million live fans and broadcast to millions more worldwide. For more information, visit SupercrossLIVE.com.

About the SuperMotocross World Championship:

About the American Motorcyclist Association: