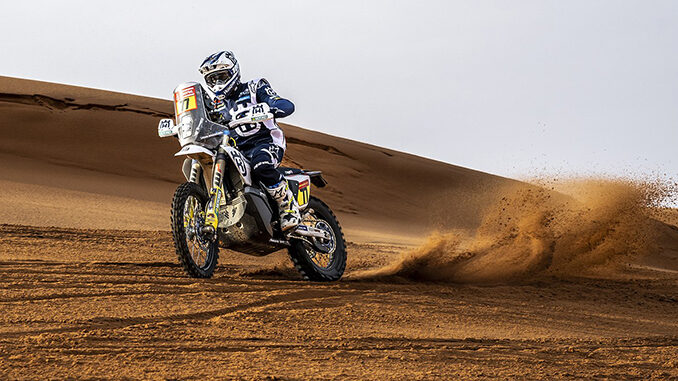 MATTIGHOFEN, AUSTRIA – January 11, 2023 – (Motor Sports NewsWire) – Winner on day nine, Luciano Benavides had the unenviable task of leading out into today’s 10th stage of the 2023 Dakar Rally. The Argentine racer did an impeccable job however, opening the stage from start to finish to ultimately post the 13th quickest time. Teammate Skyler Howes took a conservative approach to today’s special, minimising the chance of any navigational mistakes and ensuring an advantageous start position for Thursday’s first half of the marathon stage.

Continuing to deliver solid and calculated rides at this year’s Dakar, Luciano Benavides confidently took on the challenge of opening the first stage that entered the dunes of the Empty Quarter and excelled. Riding alone up front for the entire 114 kilometres, Benavides lost the minimum time to his rivals while also ensuring a strong start position for tomorrow. Completing the day in 13th, six minutes down on the eventual winner, Luciano retains his top-10 placing in the overall standings and is in the perfect position to attack tomorrow’s first leg of the marathon stage.

Also putting in a considered ride through the dunes today, Skyler Howes took some time to reacquaint himself with the Empty Quarter terrain and to ensure he made very little in the way of navigational errors. With Thursday’s stage 11 coming in at around twice the distance of today’s special, Skyler is fully aware of the importance of delivering a solid, mistake-free result on the way to the temporary bivouac of the marathon stage. Although Howes dropped down to second in the overall standings, he lies just one and a half minutes from the lead – time he hopes to make up tomorrow.

Luciano Benavides: “Today had a really long liaison in the morning – almost 500 kilometres ridden after a very early start. It was the first stage in the Empty Quarter and so it was full of dunes – very similar to the terrain seen in Abu Dhabi actually. I opened the whole stage and I think I did a good job. I picked up two minutes of bonus time, but of course you do lose a few minutes to the guys behind chasing the tracks. I pushed all day, trying to do my best, and I think I finished just inside the top 15, which gives me a good start position for tomorrow.”

Skyler Howes: “Yeah, we knew what we were getting into coming into the Empty…