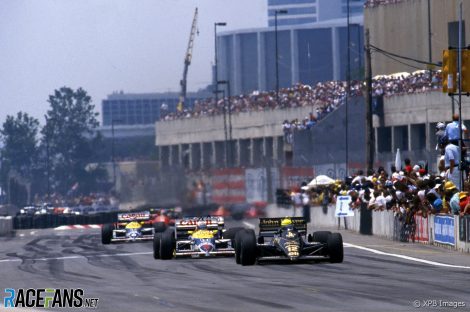 Michael Andretti’s efforts to add Formula 1 to the roster of series his team participates in is facing stiff resistance.

Yesterday Andretti hit out at his would-be F1 rivals, describing their reluctance to let his team join in as “greedy”. FIA president Mohammed Ben Sulayem may have spoken up in favour of expanding the grid, but the teams appear to be aligned with F1’s commercial rights holder, who have shown little interest in footing the bills for an 11th entry.

This is not the first time Andretti’s F1 aspirations have faced opposition. He could have made his grand prix debut on home ground in 1986, when the 23-year-old he was making a name for himself in the CART IndyCar series. But political wrangling kept him out of a vacant seat.

On that occasion Andretti it was the governing body, then known as FISA, which blocked his entry. Then as now, that threatened to undermine F1’s efforts to raise its profile in the coveted American market.

Andretti had made his CART debut at the end of 1983 after winning the Formula Super Vee and Formula Mondial series. He placed an solid seventh in his first full season the following year while father Mario, the 1978 F1 world champion, took the CART title.

The 1986 season began promisingly for Michael Andretti. He led more laps than anyone at the season-opener in Phoenix before his engine failed, then did the same at Long Beach on his way to victory. After winning at round four in Milwaukee, he came out of the final corner at Portland a week later in the lead, but ran out of fuel approaching the line and Mario beat him by seven-hundredths of a second.

Even so, the younger Andretti had unquestionably established himself as a bona fide front-runner in a series every bit as competitive as F1. He had scored in every race and led the points standings.

That same weekend F1 was racing at the Circuit Gilles Villeneuve in Canada. During the morning warm-up Patrick Tambay, driving for the American Haas team (not related to the current squad with the same name) suffered a heavy crash, injuring his feet.

Tambay was ruled out of competing in the race. With the American round of the championship only a week away, it was clear Haas would need a replacement for the race on the streets of Detroit.

Mario Andretti turned down the opportunity. He had last started a grand prix four years earlier…