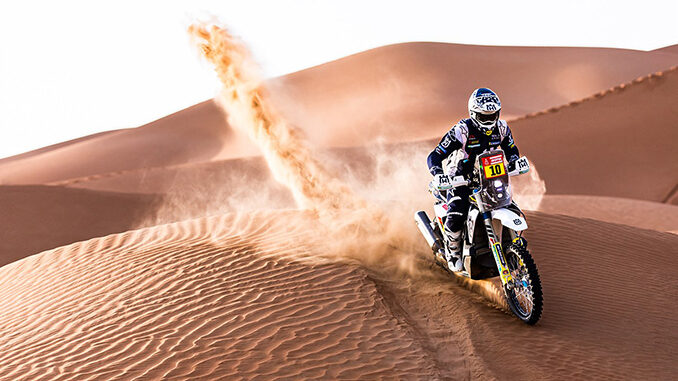 MATTIGHOFEN, AUSTRIA – January 12, 2023 – (Motor Sports NewsWire) – Husqvarna Factory Racing’s Skyler Howes and Luciano Benavides have safely completed the two-day marathon stage at the 2023 Dakar Rally. On stage 12 today, Skyler Howes finished as sixth quickest and now lies second in the overall standings – just 28 seconds off the lead after close to 41 hours of racing. Luciano Benavides opened the special today, a result of his stage win on day 11 – the Argentinian placed 12th and lies sixth overall going into the final two days of the race.

Despite the pressure of being well in the fight for victory at the 2023 Dakar Rally, Skyler Howes has delivered another cool, calculated ride in Saudi Arabia to complete stage 12 in sixth position and minimise his deficit to the provisional rally leader. His stand-out ride at this year’s event continues as the likeable American now lies in a strong second overall, and with his two closest rivals starting ahead of him on tomorrow’s stage 13, Skyler is perfectly placed to attack.

Also enjoying his time racing through the dunes of the Empty Quarter, Luciano Benavides did another stellar job opening the special today, following his win on stage 11. Benavides stayed focused throughout the 185 kilometres raced against the clock, to complete the stage as 12th fastest, a mere four minutes and 20 seconds down. An incredible performance by the number 77 who is on-course to equal or better his best ever Dakar result.

Skyler Howes: “A good stage for me today. The Empty Quarter really does live up to its name – just an endless sea of dunes. It’s really exciting to go into the last couple of days with the race so close. Both halves of the marathon stage went well – I think I was able to ride both days at a good, consistent pace. I was able to preserve myself and the bike without any issues, which is super important. So now I’m looking ahead at the last two stages of the race. Neither of them are very long, so with things so tight on the leaderboard, I really think this battle is going to run right up to the finish line.”

Luciano Benavides: “Yesterday was an amazing stage for me. My third stage win at the Dakar and I really had a lot of fun racing through the desert, jumping off all the dunes. Obviously today I had to open the stage, but I’m really happy as I think…