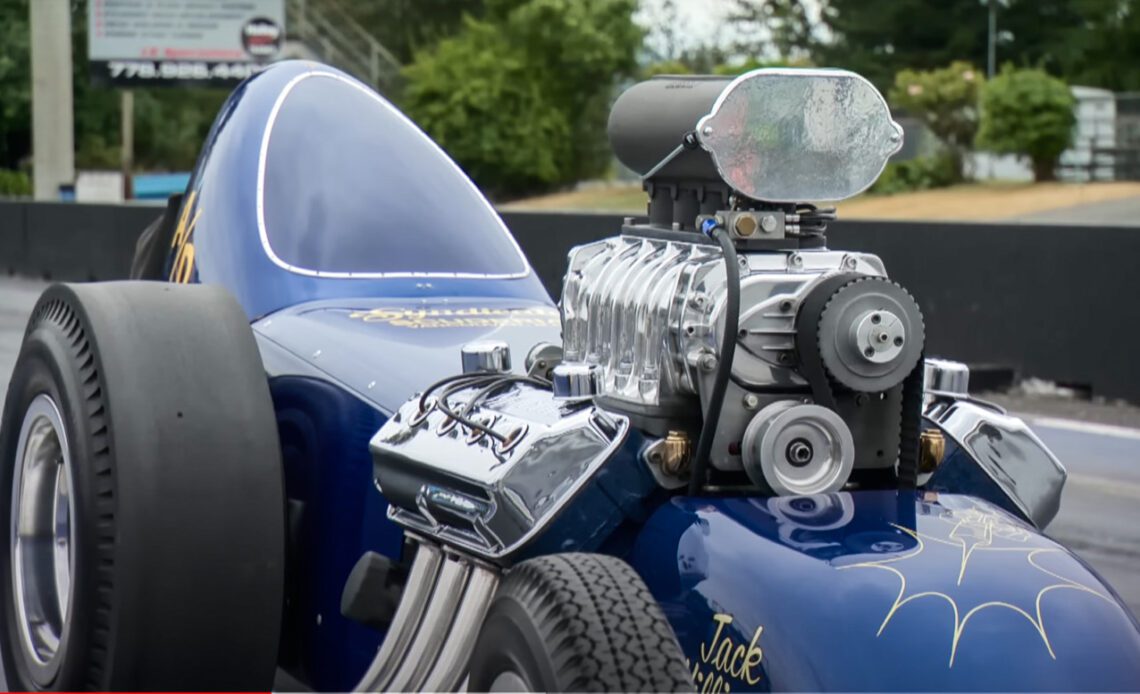 Modern-day dragster chassis are no doubt safer and infinitely more refined and functional than their golden-age predecessors, but there should be little argument that the latter exuded class and style that simply does not exist today. A shining example of this is the front engine Top Gas and A/Dragster that was built and campaigned by Jack Williams during the 1960’s.

Known as the Syndicate Scuderia (named so after his engine shop), the dragster was built by Williams, a native of Vancouver, British Columbia, and was raced under the Williams-Devine-McDougall namesake. A custom, one-off aluminum body was crafted for the car, giving it a sexy, svelte appearance that includes a 1960’s-era Champ Car nose, unique “humped” curves over the front of the 404 cubic inch Chrysler Hemi engine and front-driven Potvin supercharger, as well as a closed canopy-style cover over the cockpit — all covered in a sleek blue metal-flake paint. It was, for its time, a shining and early example of a wind-cheating “streamliner” dragster, and whether it truly worked or not is really secondary to the attention it got for said show-worthy appearance. Sixty years later, that closed cockpit and the work that Williams put into crafting it is appreciated all the more.

Williams had taught himself how to form and weld aluminum panels using the now-archaic gas welding equipment technology that was available to him in the late 1950’s, and famously restyled a number of memorable and show-winning classic and hot rods, in addition to his own dragster, and a series of other cars, including his final race car, a blown ’40 Willys gasser.

The car was debuted at the 1963 NHRA Winternationals in Pomona, California in Top Gas, where it recorded a best lap of 8.83 at 169.17 mph, and deservedly so, won “Best Appearing” honors for its beautiful looks. The cart was retired from active competition in 1967, but resurfaced in the 1986 and showed it at nostalgia drag racing events. Williams repaired and restored the car following a crash and continued to show it at nostalgia events, and today, his daughter, Wendy, keeps the history of the Scuderia dragster alive. In 2020, four men, including metalworkers, painters, and lettering artists, helped Wendy restore the body back to like-new condition, ensuring many years of continued display for drag racing history buffs like us.