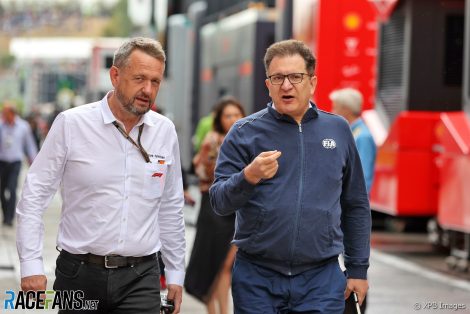 The FIA has completed the restructuring of its Formula 1 governance team which began following the controversial 2021 Abu Dhabi Grand Prix.

The governing body of motorsport has hired Steve Nielsen from F1 to take over the new sporting director role which was announced in March last year. The FIA created the position in response to the mishandling of the 2021 season finale by former race director Michael Masi.

The creation of the sporting director role was one of several changes made by FIA president Mohammed Ben Sulayem, who won election five days after the 2021 season ended in acrimony. He also introduced a new Remote Operations Centre to assist the race control team and replaced Masi with a pair of race directors supported by a permanent senior advisor.

In the new role of F1 sporting director, Nielsen will be responsible for “overseeing all sporting matters including the ongoing development of Race Control and the Remote Operations Centre, as well as future updates to the sporting regulations,” the FIA said in a statement.

“I understand and appreciate the unique challenges that come with being the regulator,” said Nielsen. “Having worked closely with a number of people in the federation over the years, I’m looking forward to tackling those challenges that lie ahead with them.

“F1 is in a great place at the moment, and it’s our responsibility to ensure the future health of the sport that is at the heart of everything we do.”

He will report to the single-seater director, Nikolas Tombazis, who was previously the head of single-seater technical matters but will now cover a broader range of responsibilities. In addition to the new F1 sporting director, the technical, financial and strategy and operations directors will also report to Tombazis.

Tim Goss, who was previously Tombazis’ deputy, will take up the technical director role and Federico Lodi has been named as financial director. Francois Sicard has taken up the new role of strategy and operations director which will involve long-term planning and administration of trackside activities.

The latest changes bring to an end what the FIA called a “transitional period” for its F1 departments.

“We have dedicated a lot of time and effort to making significant, informed changes to our F1 team to create the right structure with the right people to oversee the future regulation of the sport,” said Ben…