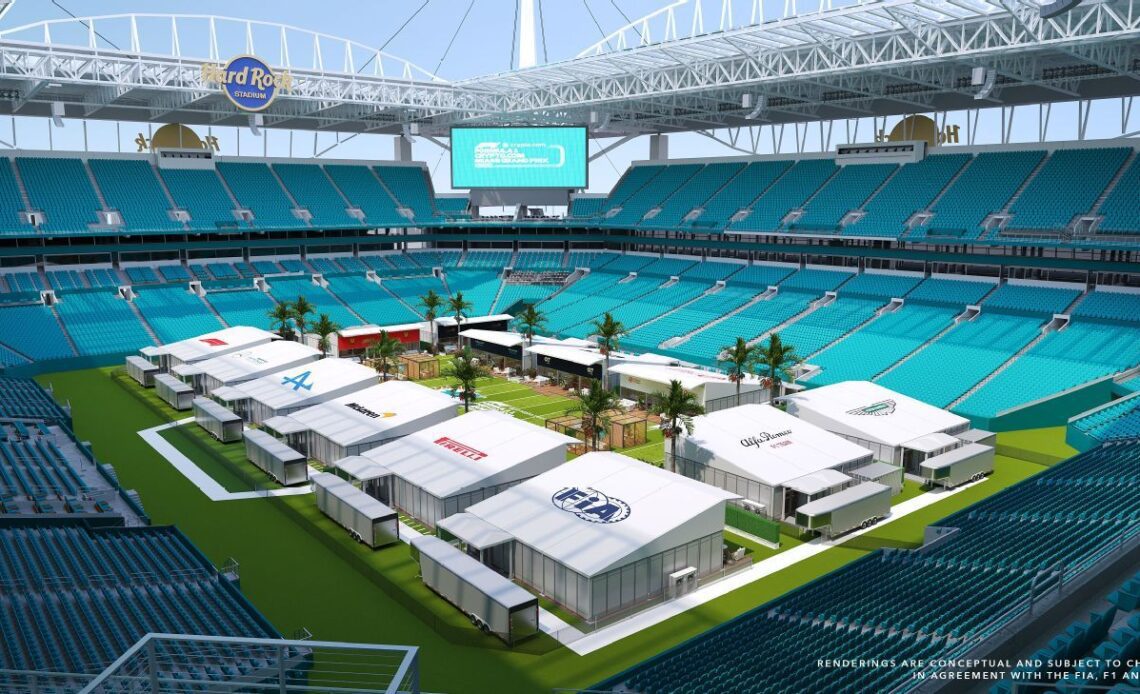 The organisers of the Miami Grand Prix have announced a series of upgrades for the 2023 version of their event, including a resurfaced track and a new paddock location on the field of Hard Rock Stadium.

Formula One’s inaugural Miami GP took place in the area surrounding the Miami Dolphins‘ Hard Rock Stadium last year, and the race will return to the venue on May 7 this year.

Updates to the facility will also include a new and expanded VIP Paddock Club building overlooking the pit lane and start/finish straight.

One criticism of the 2022 event was the crumbling of the track surface over the course of the weekend, which made it difficult for drivers to go off the racing line and overtake. Organisers, led by Dolphins CEO Tom Garfinkel, are aiming to resolve the issue and have employed renowned F1 circuit specialists Tilke to carry out a resurfacing of the circuit.

“We could have just come back with the racetrack that we had last year, because the goal we set out was to have great racing, a lot of overtaking, side-by-side racing, but the track we had last year had parts where there was one line where there should have been the possibility to overtake, and so we weren’t happy with that,” Garfinkel said.

“We’re going to go through with the investment and expense to go ahead and repave it in an effort to get it where it races better.

“It raced well enough according to the teams and drivers, but we want it to be as good as it can possibly be, so that’s why we’re going to repave it.”

Consideration was given to changing the track layout, especially the chicane at Turns 14 and 15, but ultimately the configuration of the track will remain unchanged.

“We talked to all the team principals, the drivers, Formula One and the FIA — there was differing opinions about the chicane,” Garfinkel explained. “Some of the drivers didn’t like it; some of them thought it was fine; and throughout the grid it was the same feedback, all over the place: some liked it, some didn’t, some didn’t care.

“We went through it with F1, the FIA and Tilke and decided right now we’re not going to make changes. We thought about flattening it out a bit — we’re still looking at that as we finalise things — but right now it’s going to stay the same.

“And that’s based on the feedback we received from all of them, which was a lot different, some of them didn’t like it, some of them thought it was fine. There is less run-off, so some of the hospitality areas are moving closer to the racetrack,…