Harley-Davidson Kicks Off 120th Anniversary with Reveal of 2023 Motorcycles 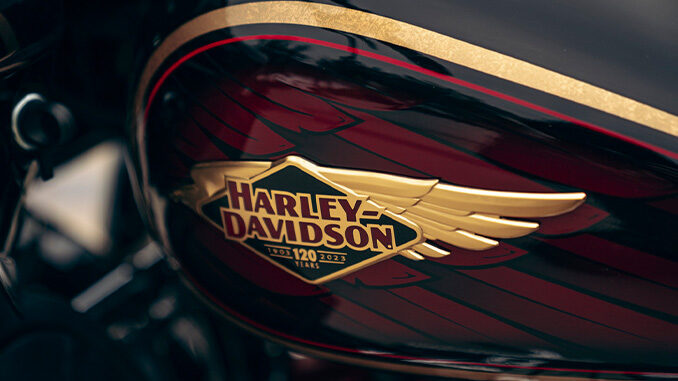 Harley-Davidson Kicks Off 120th Anniversary with Reveal of 2023 Motorcycles

The very limited-edition, super-premium CVO™ Road Glide® Limited Anniversary model celebrates 120 years of craftsmanship with one of the most intricate paint schemes ever offered by Harley-Davidson. Panels of Heirloom Red are applied over a base coat of Anniversary Black, each outlined with a bright red pinstripe and a hand-applied gold paint scallop. Subtle details added within the panels portray the head and wings of a soaring eagle. The gold-plated tank medallion depicts an Art Deco rendition of the eagle, an iconic Harley-Davidson design element. Additional details include luxurious Alcantara seat surfaces with gold and red contrast stitching accents, gold-tone powertrain inserts and bright red rocker boxes and pushrod tube collars. Only 1,500 examples of this fabulous…