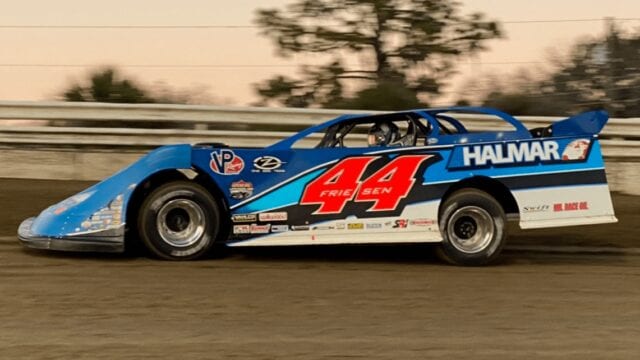 The NASCAR Cup Series regular didn’t race on dirt but made a major splash over the weekend with the announcement that he has formed a new open-wheel race team, Bell Kemenah Racing.

The team is slated to make its competitive debut this weekend in winged sprint car competition with Gavan Boschele behind the wheel according to Speed Sport; the USCS sprint car series will be contesting a two-day event at Volusia Speedway Park in Florida.

The NASCAR Craftsman Truck Series regular made a return to super late model racing as part of the World of Outlaws late model tour’s Sunshine Nationals at Volusia on Thursday and Friday (Jan. 19-20).

Thursday night showed some rust for the modified powerhouse, as he went backwards from sixth to eighth in his heat race and ran at the back of his last chance showdown race, never threatening to qualify for the A-main.

It doesn’t appear as if Friesen will be making any more late model starts as part of Speedweeks, as his tweets from Sunday reference his upcoming modified season debut.

The former Cup regular announced late last week that he would again attempt to run the full World of Outlaws sprint car schedule with his self-owned race team.

The WoO schedule kicks off as part of the DIRTcar Nationals at Volusia next month. Ultimately, a violent crash in this event last season effectively derailed Kahne’s campaign before it started, as Kahne had to sit out the WoO races at Cotton Bowl Speedway in March due to lingering injury concerns.

The longtime Cup regular also made a long-awaited return to late model racing last week, running Thursday, Friday and Saturday as part of the Early Thaw at Central Arizona Raceway.

Thursday, Schrader started hot with an easy heat race win and then ran between fifth and ninth during the late model feature before finishing sixth despite suffering damage to the passenger-side door that was visible all feature long.