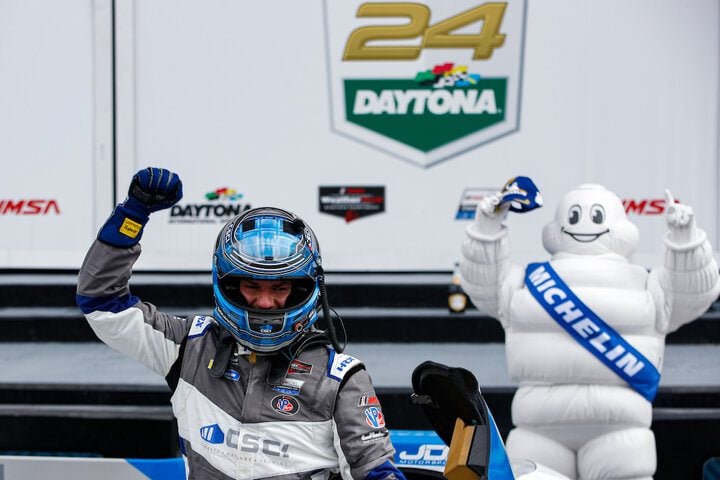 JDC-Miller MotorSports’ Dan Goldburg led flag-to-flag from the pole Sunday (Jan. 22) to win VP Racing SportsCar Challenge Race No. 2 at Daytona International Speedway. As a result, he walks out of Daytona with a perfect score of 700 points.

Goldburg’s margin of victory was 9.739 seconds over US RaceTronics’ Brian Thienes. Courtney Crone in the “Red Dragon” No. 99 was third, then Dr. Lance Willsey and Bijoy Garg.

Goldburg earned the pole by virtue of having the best second-best lap in qualifying Saturday morning. It is also possible to determine grid positions by your fastest lap in Race No. 1, but most of the grid was determined via qualifying.

On the start, Goldburg got an excellent start and was able to open up a gap over Garg. Crone was able to sweep past Garg at the first corner to take second.

Unlike Saturday’s race, Sunday’s 45-minute event was not clean. On the first lap, MLT Motorsports’ Adrian Kunzle slid off exiting the infield and nosed into the tires to bring out a yellow. Kunzle would continue after repairs, but finished 12 laps down.

Once the green came back out, Goldburg slowly but surely drove away from the field. Meanwhile, there was more trouble behind. Muehlner Motorsports America’s Mirco Schultis ran in the back of Willsey on the restart, ripping part of his front nose off. No yellow was thrown.

Later in the lap, Scott Neal spun his Ligier JS P320-Nissan and hit the wall exiting the infield. Neal was able to limp his car back to the pits, but was done for the day.

Garg was able to re-take second from Crone on the restart. Goldburg pulled out a four-second lead, then lost it when he caught slower GSX traffic.

The traffic allowed Garg to be aggressive in trying to catch Goldburg, but he went too hard into the chicane, went wide, then tried to get back on the racing line and spun in front of the GSX leaders.

With Garg out of the way, Goldburg ended up with a 12-second lead over Theines. From there, he was able to hold on to claim the sweep.

In GSX, KohR Motorsports’ Billy Griffin started from the pole, but almost immediately lost the lead to Kelly-Moss Road & Race’s Sebastian Carazo. Before he could mount a charge to get the lead back, the yellow for Kunzle’s crash came out.