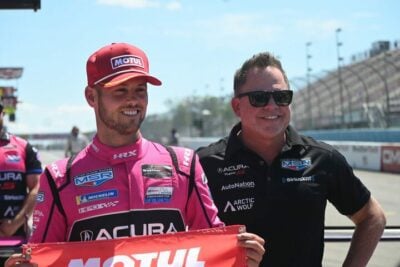 At the very last moment Sunday (Jan. 22), Meyer Shank Racing with Curb-Agajanian’s Tom Blomqvist, using fresh tires that weren’t fully up to temperature, claimed the pole for next weekend’s Rolex 24 at Daytona. Despite the new cars supposedly being slower by a couple of seconds as compared to the outgoing DPis, Blomqvist’s lap at 136.295 mph was three-thousandths of a second faster than last year’s pole lap from JDC-Miller MotorSports’ Tristan Vautier.

“[The lap] was a bit wild,” Blomqvist told NBC Sports’ Kevin Lee afterwards. “I had to wing that one a bit. I knew that I had a good car. If it was under me, I could do the job, but the tires weren’t even up to temperature. It was a ‘lick the stamp and send it’ kind of thing.”

Most of the ROAR Before the 24 had been dominated by the two Acura ARX-06s. The early portion of the session was similar as Ricky Taylor and Blomqvist exchanged quick times while the other seven GTP teams sat back and waited.

With six minutes remaining, the red flag flew when Porsche Penske Motorsports’ Nick Tandy slid off-course in the Le Mans chicane and nosed into the tires. Tandy was able to extricate himself from the barrier and drive his Porsche 963 back to the pits, but was done for the session.

At the time, Tandy was fourth. However, as per IMSA rules, he loses his best two laps for bringing out the red flag. As a result, he will start at the rear of the GTP class next weekend.

The green came back out with only enough time for an out lap and one lap at speed. Everyone did their best to put their best foot forward.

Porsche Penske Motorsports’ Felipe Nasr was able to put himself on the provisional pole. However, Blomqvist had the fastest second sector of all, got through the chicane quickly and came back around to lock up the pole.

Blomqvist’s lap was .083 seconds quicker than Nasr. Taylor will start third, followed by Chip Ganassi Racing’s Sebastien Bourdais, who only got one lap at speed. Teammate Alex Lynn will start fifth.

LMP2 teams are mandated to have their bronze-rated driver qualify. Such a rule does curb speeds to a certain extent, but high speeds were still reached.