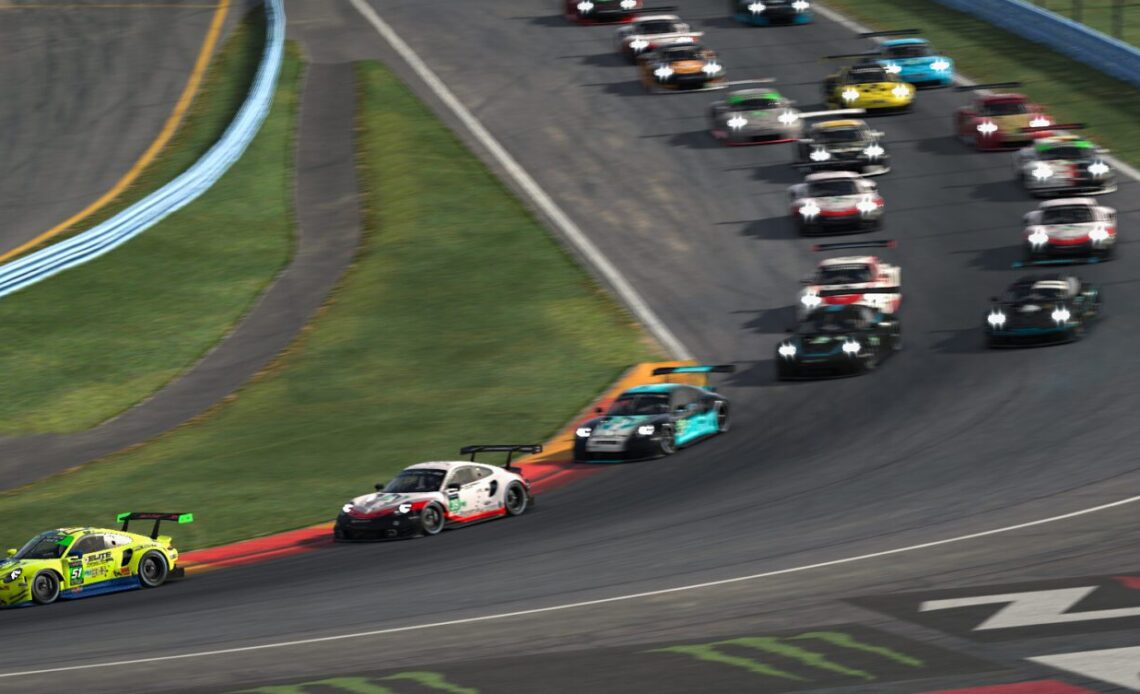 On Monday, Jan. 23, The Interstate Batteries Monday Night Racing Pro Series staged the final race of the Round of 12 in the season six playoffs with the Roasted Gems Coffee Challenge in the Porsche 911 RSRs at the boot layout of Watkins Glen International. Sage Karam won his second MNR road course race in a row, sailing to victory by a comfortable margin over runner-up Chase Cabre. D.J. Cummings continued his late-season hot streak with a third-place finish, James Bickford brought his car home fourth, and playoff driver Corey Heim completed the top five.

Check out the race recap from Frontstretch’s Ryan Kish here. You can also view the full race broadcast, along with the Frontstretch post-race show, featuring Brandon Hauff and Michael Massie, on the Frontstretch YouTube Channel. Here are the top five takeaways following Watkins Glen and the Round of 12:

Starting from the pole, Karam would receive a brief challenge early from Heim, the only other road course winner this season in the Mazda MX-5s at the Daytona Road Course. However, once Karam got around, he would open up a gap of several seconds despite sustaining minor damage early on. Karam chose to repair that damage under green flag pit stops, falling back to 10th in the running order coming off of pit road.

“I had some damage from a lapped car,” Karam explained to Eric Estep afterwards. “I took some optional repair on that first stop, and that’s why I kind of got shuffled back.”

The unplanned caution for an incident blocking the track with 28 minutes left would prove to be to Karam’s benefit, as he came down pit road to top off on fuel and regain track position, lining up fourth for the final restart. When the green flag finally came back out with 16 minutes left, Karam made quick work of David Schildhouse, Cummings, and Mark Rebilas, all of whom stayed out under the last caution, Karam cruised to a nearly nine-second win over Cabre.

With the victory, Karam has established himself as a force to be reckoned with on road courses, but he wants to be…