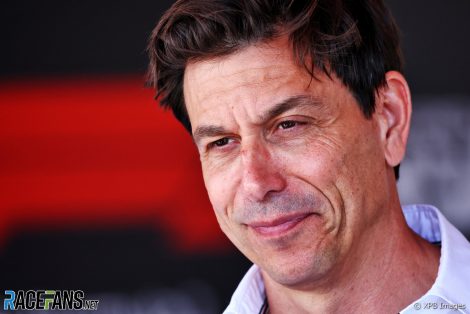 Wolff warns against ‘oversaturation’ of F1

A record 23 races feature on the 2023 F1 calendar, and a 24th was originally scheduled before the Chinese Grand Prix was dropped. The series will also hold six sprint races this year.

But although the sport’s popularity has climbed in recent years, Wolff warned it must not grow too quickly and risk becoming a turn-off for audiences.

“One should never believe that a trend will continue indefinitely,” he told Auto Motor und Sport. “That depends on how much entertainment we offer further down the track. Which personalities in Formula 1 grow up that trigger sympathies or polarise. Both are good.

“At the same time, we must not make the mistake of oversaturation. But these are all subjects we are considering.

“What remains for me as a skeptic: We should always remain cautious. Formula 1 is doing very well at the moment. It can always become better. But it can also happen that the audience’s interest subsides if we don’t entertain well enough.”

Wolff said the main causes of F1’s growth in popularity in recent years have been the rivalry between Lewis Hamilton and Max Verstappen, promotion of the sport on social media and the success of Netflix’s Drive to Survive series which have attracted new “hardcore fans” to the series.

The opportunity has come about as Wayne Taylor Racing, the team run by Ricky’s father and for which he has driven for much of his IMSA career, has tied up with Andretti in IMSA’s top GTP class for prototype sports cars this year.

Taylor previously did an IndyCar test with Team Penske in 2017, as a reward from WTR and Penske’s mutual engine supplier Chevrolet, and it helped him then land an IMSA drive with the latter for the next three seasons.

McLaren left it a while before confirming Felix Rosenqvist would continue with them for a third year in IndyCar, after taking a pole and a podium in 2022, but they’ve left no delay in revealing his livery for the…