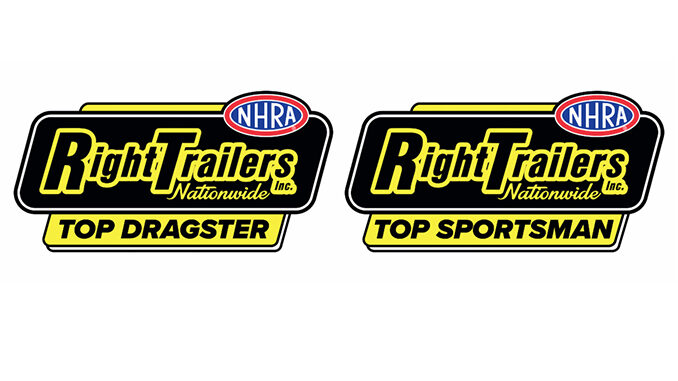 INDIANAPOLIS, IN – January 25, 2023 – (Motor Sports NewsWire) – A longtime supporter of NHRA drag racing, Right Trailers will now sponsor both the Top Dragster and Top Sportsman classes in the NHRA Lucas Oil Drag Racing Series as part of a new multi-year agreement between the NHRA and Right Trailers.

Contested at 18 national events during the 2023 NHRA Camping World Drag Racing Series season, Top Dragster and Top Sportsman, which routinely run in the sub-six second range at more than 200 mph, will also be featured at divisional at regional events throughout the country this year. In 2022, Jeremy Hancock claimed the world title in Top Dragster, while Lance Abbott was the Top Sportsman world champion.

“These are two classes we’ve really wanted to sponsor, and we’re thrilled to be partnered with the NHRA and its Top Sportsman and Top Dragster categories,” Right Trailers President Michael Scott said. “It helps us continue to expand our network at some of the highest levels of drag racing competition, and these two classes especially are home to some of the most exciting racing around. Being involved in NHRA drag racing is an important part of our marketing plan and from a branding perspective, having our decals on all the cars in these classes and seeing it everywhere, it’s a pretty awesome opportunity.”

Started in 2004, Right Trailers has become an industry leader, growing to four locations with an inventory of more than 1,000 trailers and more than 10,000 trailer parts. They are an authorized dealer for many of the most respected brands and part suppliers with a strong focus on customer service, listening intently to the needs of their customers. Right Trailers has provided world-class trailers to customers around the world, offering trailers from some of the most popular brand names.

“Right Trailers is a company that is passionate about NHRA drag racing and providing top-notch support and products to race teams, and we’re thrilled to have them as the sponsor for Top Dragster and Top Sportsman,” NHRA Director of Advertising/Sponsorship Sales Jeff Morton said. “They’ve been invested in our sport for many years and it’s exciting to see…