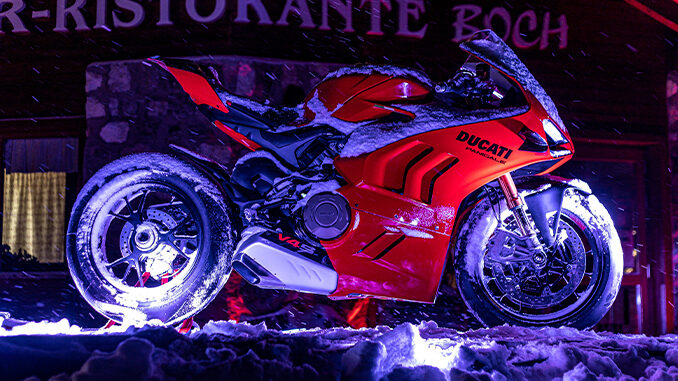 Borgo Panigale (Bologna)/Madonna di Campiglio in Trentino (Trento), Italy, January 25, 2023 – (Motor Sports NewsWire) – After the astonishing 2022 racing season, which ended at the top of both World Championships, Ducati did not change its habit of staying on top, by choosing the mountains of Madonna di Campiglio (Trento, Italy) as the location for “Campioni in Pista”, the event that officially sanctioned the start of 2023 for the World Champions.

It is the first time in its history that Ducati has presented the official MotoGP (Ducati Lenovo Team) and WorldSBK (Aruba.it – Racing Ducati) teams simultaneously. The Bologna-based motorcycle manufacturer wanted to celebrate the importance and expertise of the best Ducati Corse team ever.

The “Campioni in Pista” format proved to be a great success wtih the presentation of the liveries of the 2023 version of the Desmosedici GP and the new Panigale V4 R, with moments of pure fun on the snow of Madonna di Campiglio. The “Pearl of the Dolomites” proved to be an ideal location for an event of this kind thanks to the numerous tourist, sporting and culinary attractions and the naturalistic context, which fully expresses those typically “Made in Italy” charm and style values that also characterize the Ducati brand around the world.

The official presentation of the Ducati teams took place on the morning of Monday, January 23 at the Palacampiglio with global live streaming on the digital channels, while in the afternoon, Ducati heroes met the public in the center of Madonna di Campiglio: the reigning World Champions Francesco Bagnaia and Alvaro Bautista took to the stage in Piazza Sissi, accompanied by their respective teammates Enea Bastianini and Michael Ruben Rinaldi and by the motorcycles they will race with this season, on which both have chosen to show off the number 1.

“Campioni in Pista” was created by…