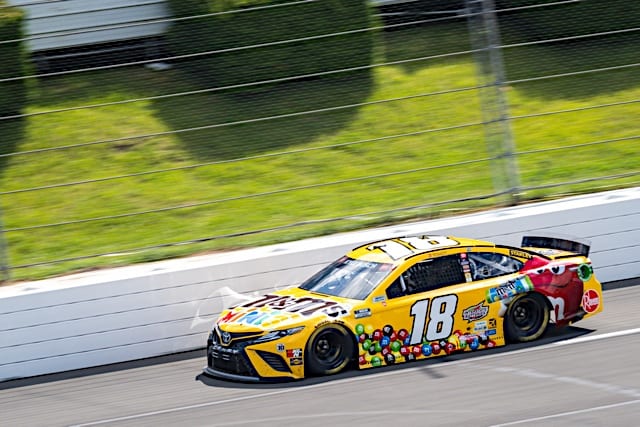 It might be a little tricky for the NASCAR Cup Series drivers to navigate around Pocono Raceway this weekend. Let’s hope your DraftKings contests will be a treat after Sunday’s (July 24) M&M’s Fan Appreciation 400 (3 p.m. ET on USA Network).

Despite what some people are suggesting on Twitter, Pocono has just three turns. It’s called the Tricky Triangle, not the Tricky Pentagon. But I digress.

It’s definitely a unique course, as its turns are modeled after three different racetracks, one of which the Cup Series currently competes at (Indianapolis Motor Speedway, though the past two years have been on the road course). Each turn is shaped differently with different amounts of banking. It’s also very long, sitting at 2.5 miles. Since it’s so different from any other racetrack, it’s hard to really prepare for it in daily fantasy, especially since the Next Gen cars are taking it on for the first time.

But certain trends could come into play for DraftKings. Momentum and consistency from the past few races this year can indicate which ones are likely to finish up front on Sunday. Also, drivers who have performed well at Pocono in the last few years could carry that talent through to this weekend.

Practice and qualifying could help you choose the right drivers as well. Just remember that there won’t be much time for drivers to get on track, so you won’t have as clear of a picture from their practice speeds. But if you want to check it out, it comes on July 23 at 2:35 p.m. ET on USA Network (if the rain stays away).

Before I share which drivers I’m thinking about placing in my lineup for the Tricky Triangle, here are the results from last week’s race at New Hampshire Motor Speedway:

Well, on the plus side, this lineup had the winner (Christopher Bell) and fifth-place finisher (Kevin Harvick). That’s about the only good outcomes, though, as Aric Almirola had a mechanical issue after qualifying in the top 10. Also, Kyle Busch had two solo spins, and though he recovered to finish 12th, his other Joe Gibbs Racing teammate Martin Truex Jr. was the one to play on DraftKings. Truex scored 102.05 fantasy points after leading 172 laps and coming home fourth.