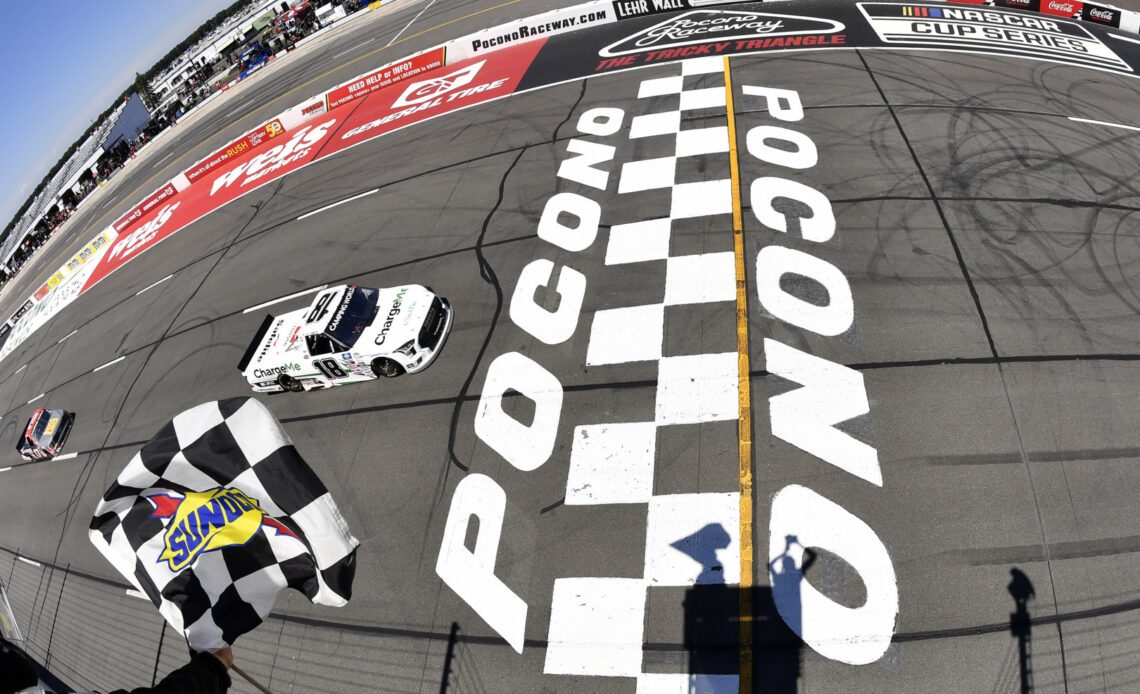 It marked the seventh race win for a Kyle Busch Motorsports (KBM) team in the last eight Pocono races with Smith leading a commanding 49 of the 60 laps in the No. 18 KBM Toyota Tundra. The 20-year-old Georgia native had to hold off a final lap charge from Ryan Preece, however, and did so by a close .262-seconds to hoist his fourth career trophy.

“We’ve been going through a little bit of a struggle here recently, but just when we needed to shine and we started shining,” Chandler Smith said of the victory – his first since a win at Las Vegas Motor Speedway in March.

Front Row Motorsports driver Zane Smith finished a distant 13th in his No. 38 Ford F-150 dealing with throttle issues early in the race. But with the regular season title in hand, the series-best three-race winner will start the Playoffs with that all-important 15 bonus Playoff points. He’s hoping to become the first Regular Season Champion to win the season title since 2017.

“Man, today was a major struggle,” Smith said. “Started out from the green flag to pretty much the end of Stage 2 our throttle was sticking and everything we were doing wasn’t fixing it. So, little worried at times because I knew I just had to have a couple points.

“Long day, once we did get it right still fought a really, really tight truck, but there’s no giving up,” Smith added. “Glad we’re on to the Playoffs and ready to get this postseason started.”

The other end of the Playoff drama, veteran Matt Crafton was able to hold onto his 10th and final Playoff transfer position – finishing 15th in the race, but with a 17- point edge on 19-year-old Derek Kraus, who finished ninth. Crafton, a three-time series champion, has now qualified for the series Playoffs every season since its inception into the series in 2016.

“These guys did everything they were supposed to and worked their rear ends off with TRD (Toyota Racing Development) and worked on the simulator, working on getting our set-ups better and we were really good on the short runs, we had a way better truck than where we finished,” Crafton said.

“Take your gloves off and do whatever it…