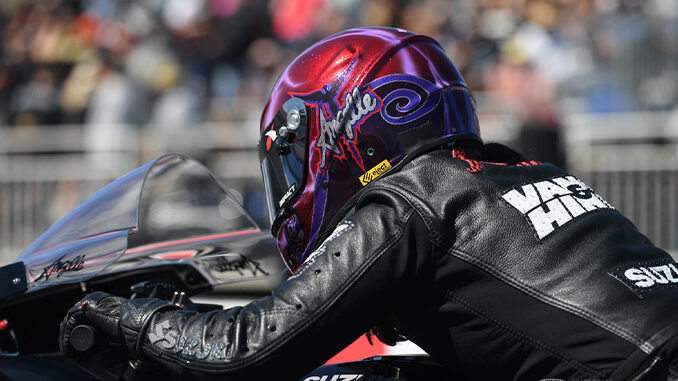 Hight’s run of 3.825-seconds at 332.75 mph from Friday in his 11,000-horsepower Auto Club Chevrolet Camaro held up, giving the Funny Car points leader his third No. 1 qualifier this season and 74th in his career. In addition to his three straight wins at Sonoma, Hight also has five victories in 2022, including two in a row, and he will open eliminations against Jeff Diehl on Sunday.

“There’s a lot on the line, but we just need to take it one round at a time,” Hight said. “You’ve got to try to be perfect and you have to be aggressive out there. To win rounds and come out on top, you’ve got to be on edge, and I’ve got the best guys in the business behind me to get this done. We’re very confident right now because we’ve won the last two races and we qualified No. 1 here, but you have to continue to take it one round at a time because the competition is so good. There’s a lot of good cars right now so to do what we’re doing makes it that much more special.”

In Top Fuel, Leah Pruett earned her first No. 1 qualifier this season and 12th in her career when her pass of 3.689 at 327.59 in her 11,000-horsepower Rayce Rudeen Foundation Top Fuel dragster stood up. Pruett closed out qualifying with a solid run as well, giving her confidence heading into eliminations. She’ll start raceday against Jim Maroney and after finishing as runner-up in Sonoma last year, Pruett will try to finish the job on Sunday and pick up her second consecutive win this season in the process.

“It’s extremely exciting to qualify No. 1 and it shows just difficult it is for anybody,” Pruett said. “We know exactly where we’re at. It feels like the work has been validated and we’re just going to keep digging on that. If we’re able to do what we did in Denver and make it to…