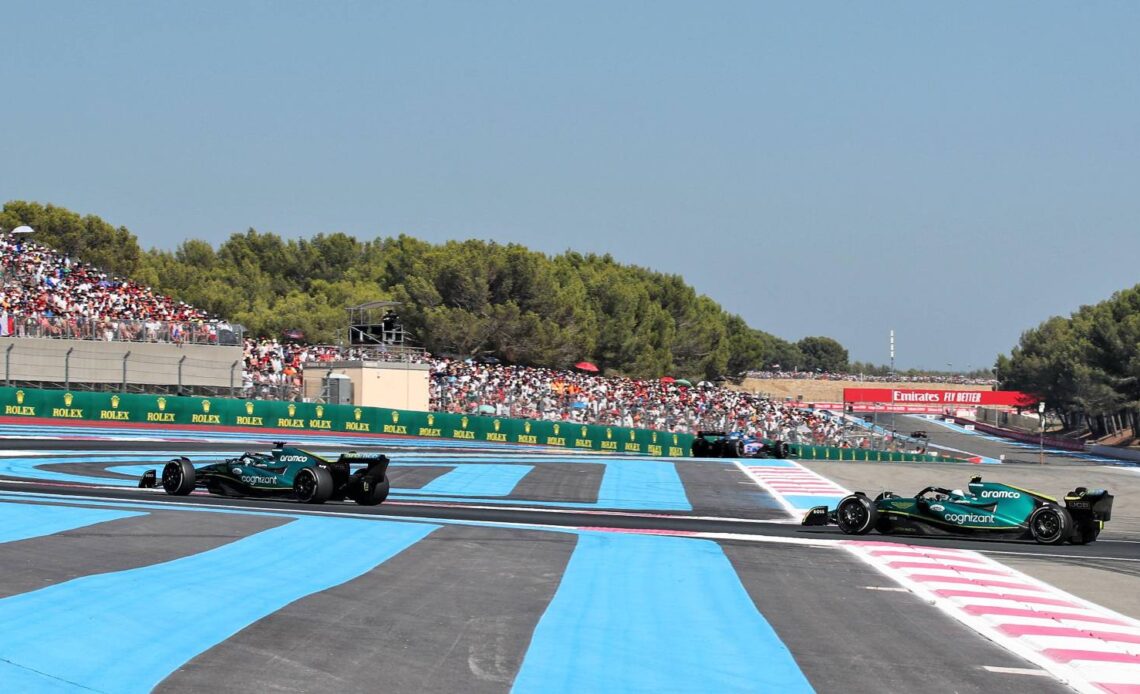 Sebastian Vettel saw no point in trying to deny team-mate Lance Stroll P10 in France, though they still collided.

The Aston Martin pair would battle over the last points-paying position at Paul Ricard in the closing stages, Stroll ultimately securing P10 and the single point to go with it.

Vettel meanwhile crossed the line P11, but not before giving the back of his team-mate’s AMR22 a whack, Stroll very slow on exit of the final corner.

Vettel had decided that even though he felt faster than his team-mate, there was little point in trying to replace Stroll in the points and give Aston Martin the same score, regardless of which way around their drivers finished.

Lance’s “defense” against Seb in the final corner pic.twitter.com/EoBaIm6ReZ

“I had a chance to pass Lance on the final lap,” said Vettel, as per the Aston Martin website.

“I was a little bit faster but we are not fighting over one point – it is the same net result for the team. It does not make any difference.”

That incident then came at the end of a “frustrating” afternoon for Vettel, who for much of the race found himself stuck in traffic.

But, while he says that the AMR22 needs more grip, he was pleased to see that the midfield cars ahead were not able to completely pull away.

“My afternoon was frustrating,” said Vettel. “I was stuck in traffic for the whole race – but you expect that when you start in the midfield.

“And, with the strategy, I do not think there was really much more the team could have done there.

“It is clear that we need more grip. In the race, things were not too bad – the cars ahead of us were not disappearing – and we also understand the car a little bit more after this weekend.”

Stroll felt that a strong start had set him up perfectly for the race ahead, while he would put that late incident with Vettel down to a “snap” as he struggled to nurse his tyres to the end.

“We had a great first lap today that set us up to have a great race,” said Stroll. “I nearly got [Esteban] Ocon in Turn 9 as well, but it was important to have such a good start.

“I felt I had some momentum in the closing stages to possibly catch [Daniel] Ricciardo. We are continuing our trend of being more competitive on a Sunday so today is a good platform as the summer break approaches.

“I had a snap on the exit on the last lap because I was struggling with my tyres at the very end. It was a good fight…