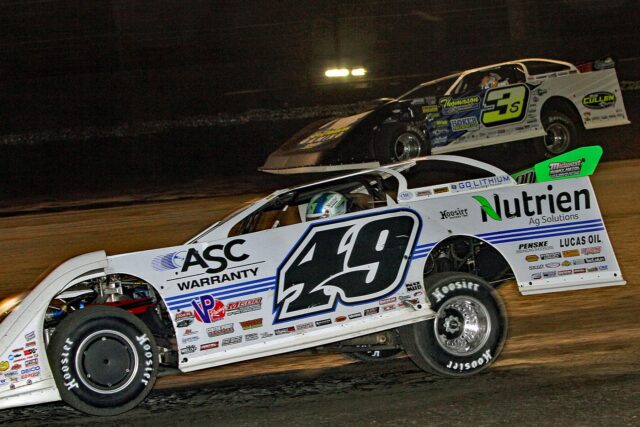 All it took was one mistake from polesitter Tyler Bruening and that was all she wrote. Jonathan Davenport, 24 hours removed from a $53,000 win at I-80 Speedway Sunday night, led the last 48 laps of Monday’s Hawkeye 50 in Iowa after Bruening got crossed up in turn 2, grabbing a $20,000 paycheck to add to his nation-leading winnings total in 2022.

. @dirtvision REPLAY: What a brilliant Feature Race from @BooneSpeedway tonight!!…. and it’s @TheFast49 who takes home the trophy and the check!! @DennisErbJr and @MikeMarlar rounded out the podium!! pic.twitter.com/hw002zhKah

Though Davenport was the class of the field, a late-race caution for Boom Briggs with 10 laps to go made the win a lot easier. Dennis Erb Jr., the current World of Outlaws late model points leader, proved to be unstoppable on the low side of the Boone Speedway and was running down Davenport in lapped traffic prior to the lap 41 yellow.

Though Davenport made the feature academic up front, the battle through the top five was stellar, with Erb, Bruening, Ryan Gustin, Mike Marlar and Devin Moran putting on a show.

In his victory lane interview, Davenport sounded about as clueless as I’ve ever heard him, lamenting that the track needed work to put on a better race and that he didn’t really know how to get around the black dirt surface (Monday marked Davenport’s first race at Boone). Despite mistaking the on-track product as needing improvement (it didn’t, the racing was FANTASTIC) and supposedly being lost, Davenport led 48 laps and won $20,000. I wish I was that productive when lost.

Watching Erb Jr. run down Davenport only to have a late-race caution derail his momentum was just the latest reminder of how the driver known as…