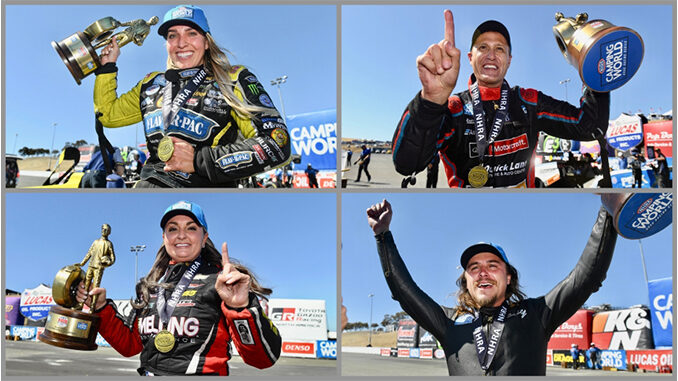 SONOMA, CA – July 25, 2022 – (Motor Sports NewsWire) – On a day that included a barrage on the Sonoma Raceway record books, Top Fuel star Brittany Force rolled to her fourth win of the 2022 season on Sunday and moved into the points lead in front of a packed house at the 34th annual Denso NHRA Sonoma Nationals.

Force went 3.709-seconds at 335.48 mph in her 11,000-horsepower Flav-R-Pac dragster to beat Mike Salinas in the final round, moving back into the points lead over Salinas with her first win at Sonoma and 15th in her career. Force made the quickest run in Sonoma Raceway history in the first round with a 3.662 in her win over John Force Racing teammate Austin Prock and then set the track speed record on three consecutive runs on Sunday, capped off by a 337.75 in her semifinal victory over Shawn Langdon. It puts her back in the points lead in Top Fuel and gives Force one of the most memorable wins of her standout career.

“It was an incredible weekend for our team,” Force said. “I’ve been coming here since I was a kid, but I’ve always struggled on the Western Swing as a racer. Winning in Sonoma has always been on my bucket list and to run so outstanding, I’m really proud of this team. To put those kinds of numbers on the board, it’s just incredible. I have to give it up for my team and I’m always going to bet on them. There’s a lot of good competition in this class, but we’re going for this championship. I’m excited for today and we’re ready to keep going.”

Racing at his home track, Salinas advanced to his 14th career final round and his fifth this season picking up round wins against Justin Ashley and Doug Kalitta. He now trails Force by six points.

Bob Tasca III was the epitome of consistency in Funny Car, starting eliminations with back-to-back runs of 3.875 and finishing his day by going 3.911 at 325.61 in his 11,000-horsepower Motorcraft/Quick Lane Ford Mustang to knock off John Force in the final round. It gives Tasca, who had lost in the final round at the past two races, his first win of the season and 10th in his career and gives the standout plenty of momentum in the second half of the season. He…